“All men are allowed to fall in love. It’s expected of them, actually.”

You know, people complain about how difficult homeschooling is, but it’s a breeze, really. At school, there’s a real problem with classroom size, and that’s even more important when your child is a 6’6″ Frankenstein with kung fu grip. He needs the personalized attention that he can only get from a child-centered environment. Besides, they’re teaching about evolution at school and not creationism — which, for a child assembled in a mad science lab, is pretty insensitive.

Homeschooling is super convenient, too. All you need to do is give him some books and keep him in a dusty old cobweb sanctuary, and the kid practically educates himself. Then you arrange for some seriously ill-advised sex ed training, and you’re good to go.

Adam’s been cooped up in the abandoned west wing of Collinwood for two weeks, hiding from the police and catching up on his Elizabeth Barrett Browning. He’s made tremendous progress in the crucial academic disciplines of talking, reading and sitting more or less quietly, but he’s a big boy, and he needs some more room to spread out.

Meanwhile, Adam’s drawn the attention of Nicholas Blair, a sinister sorceror who’s been staying at Collinwood, dividing his time equally between lurking, sneering and forming vague yet menacing plans. He’s got the idea in his head that if he can bring Adam over to the dark side, he can learn the secret of creating life. 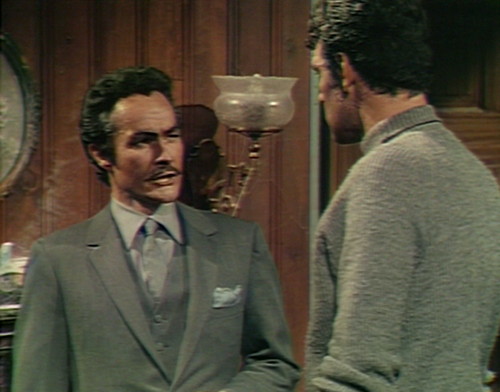 Adam is bored and lonely, and his romantic interest in Carolyn is being ignored, so Nicholas takes the opportunity to slip some new items into the curriculum. He starts encouraging Adam to behave like a man, and not let people keep him locked up.

Like any good confidence man, Nicholas exudes nothing but confidence and man-of-the-world sophistication.

Nicholas:  There’s no need for you to be cared for, like an infant, even if your keeper is as pretty as Carolyn.

Nicholas:  You’re in love with Carolyn, aren’t you?

Adam walks across the room, with a shy smile.

Nicholas:  Oh, you don’t need to be embarrassed about it, Adam! Why, all men are allowed to fall in love. It’s expected of them, actually.

Adam:  Every man falls in love?

Nicholas:  Usually, with someone.

Adam:  Then what does the man do?

Nicholas:  He makes the woman love him. He shows her how much stronger he is than she.

Oh, dear. This is leading up to a pretty unfortunate homework assignment.

Nicholas:  Adam, you must learn to take what you want!

Adam:  How do I learn that?

Nicholas:  By grabbing. By demanding! If necessary, by lying, cheating. It’s the only way. Oh, you will learn. I’ll see to it that you do. 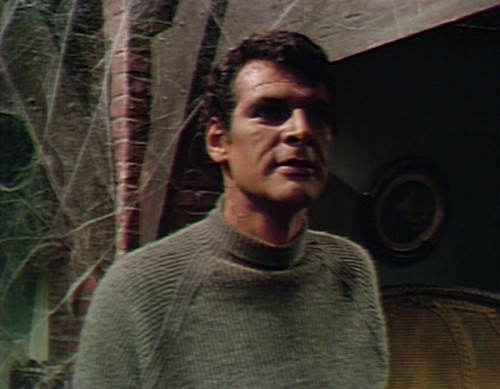 So this is the point in the Adam storyline when you realize that they’ve spent the last three months walking us through the first act of a tragedy.

Various people have come in and out of Adam’s young life. Professor Stokes is the one who’s been the most helpful and paternal, really interested in Adam’s progress and willing to spend more than five minutes in his presence at a time. But Stokes has never had children, and he doesn’t really know how to guide Adam’s emotional development.

Adam’s been acting out lately — clinging to Carolyn, and even kissing her at one point — but Stokes and Carolyn have been treating his journey through adolescence as something that could be pushed to the side. Last week, Stokes actually told Adam to forget about his romantic feelings and concentrate on his reading. This was a mistake.

So Nicholas has swooped in, staking a claim on the territory that Stokes and Carolyn left unguarded. The “take what you want” message has some obvious appeal, if the alternative is to hide in a dark room for the foreseeable future.

So the question of Adam is still up for grabs. Is he a good guy in a bad situation, or is he inherently violent and savage? So far, the show appears to be coming down on the side of sympathy for Adam, who had a brutally abusive early childhood, and is just trying to reach out for love and connection.

Which leads us, tragically, to the rape scene, which I suppose was inevitable, and the arc of Adam’s emotional and moral development hits a wall and shatters into pieces.

We’ve seen this kind of thing before on Dark Shadows; it’s pretty much impossible to do a vampire story without getting rapey every once in a while. The moral values of the show have been subverted by the producers’ need to keep the most popular villain on the show indefinitely.

Barnabas makes weird, unconvincing excuses for his assaults on young women — I couldn’t help it, I had to protect myself, I want to stay with her for eternity — and the show has allowed the audience to make up their own minds about whether that’s acceptable or not. They’ve even done the hideous “rape a girl, and she falls in love with you” trope so common to vampire fiction, including an attack on Carolyn a year ago.

In this case, the rape story is much more complex. Barnabas’ weird expression of his “needs” aside, he’s an adult man who knows exactly what he’s doing when he sacrifices a girl’s life for his own pleasure and protection. But Adam is just learning about life, and he hasn’t had many positive influences. You could easily make the case that he legitimately believes that this is how it works between men and women, and that she’s expecting him to use these enhanced procreation techniques.

On her side, Nancy Barrett is making the same acting choices that she made when Adam first picked her up and carried her away a couple months ago. She’s fully committed to the idea that this is not sexy.

She lowers her voice to a whisper, saying, “Oh, no,” as she tries to pull away. That’s fear in her eyes, not suppressed attraction. She is doing everything she can to dispel the idea that she might be secretly enjoying this.

And then we get to a point where the audience’s sympathy for Adam’s point of view breaks down. There’s a lot that he doesn’t know about life, but the one lesson that he’s learned over and over is that pain hurts.

No matter what he thinks is the correct romantic approach, she’s saying, “Adam, you’re hurting me,” and that should be the trigger that turns him off. It doesn’t go that way. 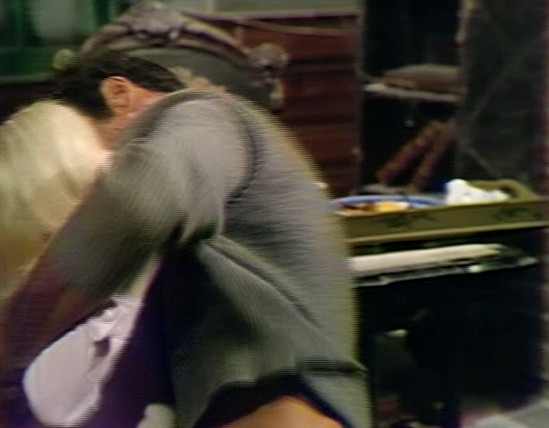 So the vaguely villainous Nicholas Blair has finally stepped up, and become a real force for evil on the show. He’s intentionally set up a situation where Carolyn will be sexually assaulted, and Adam will be banished, and separated from the few people who actually care about him.

Like a cult leader, Nicholas is cutting Adam off from his support network, so he can gain control over Adam’s life. Barnabas, Julia and Dr. Lang may have breathed life into a patchwork corpse, but Nicholas Blair has created a monster.

Tomorrow: The Afternoon After.

In act 1, when Barnabas talks about feeling free, there’s a crash as something falls over in the studio.

When Nicholas tells Carolyn that Cassandra is gone forever, the camera wobbles.

Roger tells Nicholas, “I love it here, because I was born in Collinwood, but I can’t imagine why you would prefer it to all the places you’ve been.” He means Collinsport.

Props note: Nicholas takes a tour of the House by the Sea today, which he’ll be renting from the Collins family. The drawing room is partially a redress of Dr. Lang’s front room, which was previously the master bedroom in the Old House. The Smith Brothers portrait is hanging on the wall, crooked — it’s previously been seen at Professor Stokes’ house and several other places.

There’s also a lamp with multi-colored stained glass, which I don’t think we’ve seen before, and which is extremely 1968.

In later episodes, there’ll be a doorway to the left of the fireplace, but in this episode, there’s a tapestry hanging where the door will be.

Tomorrow: The Afternoon After.