The room is dark, and grim. The single window — if it even counts as a window — lets in stray slices of sunlight through a torn shade. The cobwebs are an inch thick, and there’s a large picture frame dangling at an odd angle from a beam, apparently supported mostly by dust and despair.

The room is more than just unused. It looks like a pack of timberwolves came through sometime around the Civil War, and it never really pulled itself together after that.

Also, there’s a monster in it. 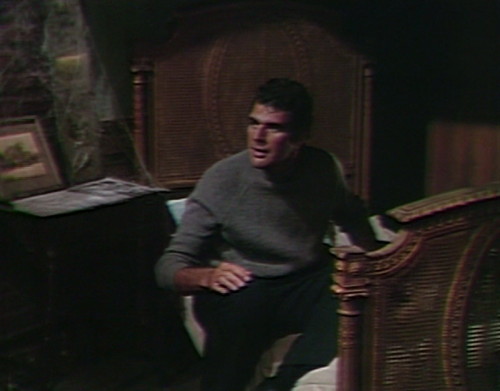 The monster is a walking jigsaw puzzle of corpse parts with a romantic streak and an imprecise grasp of personal pronouns, assembled by a mad scientist and unleashed on an unsuspecting world.

Adam is now a fugitive on the run, with a trail of the injured and dead scattered behind him. He’s being protected by Carolyn, who he somehow befriended mid-kidnapping, and he’s holed up in the abandoned west wing of Collinwood, waiting for somebody to figure out what he’s supposed to do next.

He’s been stuck here for several days, and he’s not getting out anytime soon, because we’re in the middle of a five-episode stretch written by Ron Sproat, who loves locking characters up in rooms and then worrying about them. 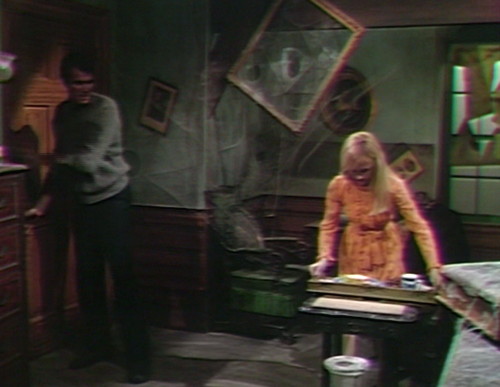 But Adam brightens up when Carolyn arrives with his breakfast, which she sneaked out of the kitchen on a tray because Carolyn is hardcore.

He has no interest in the food; he’s just delighted to see her. He’s spent the last couple days in lonely confinement, with nothing to do but dream about her and read poetry.

Yeah, you heard me. Professor Stokes has smuggled a stack of books across enemy lines, and Adam’s been memorizing lines from Elizabeth Barrett Browning’s Sonnets from the Portuguese.

He hands Carolyn the book, and points out the passage that he’s been studying. She reads aloud.

The widest land
Doom takes to part us, leaves thy heart in mine
With pulses that beat double. What I do
And what I dream include thee, as the wine
Must taste of its own grapes. And when I sue
God for myself, He hears that name of thine,
And sees within my eyes the tears of two.

So here’s a tall, handsome guy who sits around in a dark room reading love sonnets and pining for the woman he loves. It’s not everybody’s definition of the ideal boyfriend, but he’s definitely more dream date than violent ghoul.

So the question, as always with Adam, is: what the hell kind of character is this? There’s a long line of eccentric oddballs on Dark Shadows, but I don’t think there’s been another character who just confounds categorization like this.

Is he the villain or the hero, a dangerous abomination defying God’s plan, or a sweet recluse who just wants to be loved? Is his passion for this exceptional young woman romantic, or deranged, or some new hybrid that nobody’s ever thought up before? 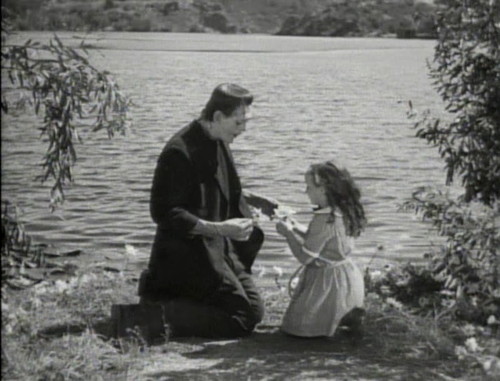 I mean, a Frankenstein monster is always the misunderstood loner. Treated gently, he’d prefer to spend his days sitting in the sunshine and picking flowers, but he was born in darkness and pain, and all he knows is suffering. When he tries to connect with an innocent young girl, he makes a clumsy, fatal mistake, because he doesn’t know his own strength, and neither does she, until it’s too late.

Crossing that story with a daytime soap opera creates an even stranger mix of jigsaw pieces. Characters have described Adam as an ugly brute, but he’s Hollywood ugly at worst, a melancholy grad student in a turtleneck and slacks.

So now he’s going to make his move. Observe the technique.

Adam:  What does it mean?

Adam:  But what does it mean?

Carolyn:  It’s a poem written by a woman, telling a man how much she loves him.

And then he stares into her eyes. Gentlemen: take note. The “what is this thing you Earth people call kissing” approach may have fallen out of fashion, but it’s pretty effective.

Carolyn looks away, and tries to make a joke. It’s actually not super clear what she thinks she’s doing here.

And that’s when things start to get a little handsy.

So for Nancy Barrett, this moment could be played in just about any way she’d like.

Adam is enormous, and supernaturally strong. He ripped apart a jail cell and escaped; he survived a jump from Widow’s Hill. But even without that — just using the strength of a normal man that size — he could do pretty much anything he wanted here, from the gentle and consensual to the unbelievably horrific.

And you look at Carolyn’s face, and she’s scared. I’m not sure if surprised is in there or not. But she definitely knows that she’s in way over her head, and she really isn’t sure what’s going to happen next.

It would be possible to play this scene as if Carolyn is flirty and pleased with the attention. That is not Nancy Barrett’s choice. Carolyn thinks that Adam is a good guy. Partly she feels sorry for him, partly she’s amazed by how remarkable he is. But she’s also frightened, and she knows that he could do pretty much every worst thing possible, without even understanding what’s going on.

So it’s a weird, complicated story beat, and Adam is a weird, complicated character. He’s making Carolyn uncomfortable — but he’s also making it clear that he doesn’t mean any harm. He’s improperly socialized, a monster child raised by people who kept him in a cage. His body is way too big and way too strong for the level of emotional maturity that’s currently powering it. 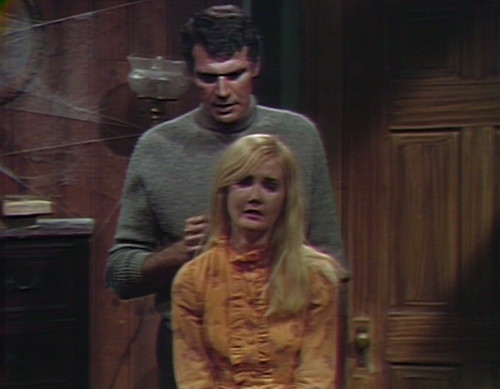 But he’s picking things up fast. He’s already got passive-aggressive down.

Adam:  Carolyn is afraid of Adam?

Carolyn:  No. No, of course I’m not afraid of you.

She holds out her hand, and he takes it, delighted, in both of his enormous meathooks. It’s a nice moment — but, again, Nancy Barrett is playing against it.

Imagine Alexandra Moltke as Vicki, in the same situation. She would play this scene entirely at face value, as if it never occurred to Vicki that Adam was anything more than a pal that she’s trying to help out of a jam. That’s why Vicki never grew or took off as a character; the actress didn’t have the talent or the self-awareness to play against the grain of the scene. Nancy Barrett can do that, and her performance allows a more complicated ambiguity to develop.

So what’s going on here? Is this a romantic scene about two crazy kids from different worlds falling for each other, or is this the doomed little girl by the lake, ten seconds before the bad thing happens?

And more importantly — does this scene make you want to watch another scene? In the end, that’s the only question that actually matters in a material way. Every scene of a television show is an advertisement to stay tuned for the next scene, and that goes double for daytime. Television only has one rule, and it’s “Don’t touch that dial.”

For me, this is working. I want to watch this scene, and I want to watch the next one. This scenario could go in several different directions, all of them heartbreaking. Plus, you never know when the next undead poetry slam is going to start.

Tomorrow: The Trouble with Harry.

As Mrs. Johnson leads Harry out of the drawing room and around the corner, someone cracks up laughing. It sounds like Harry, who was breaking into a wide grin while exiting the room.

In act 3, when Carolyn enters the drawing room to talk to Barnabas, you can hear footsteps in the studio.

Resident prop-spotter Prisoner of the Night says: “Adam’s room in the west wing of Collinwood was originally Angelique’s room at the Old House in 1795, and also Peter Bradford’s independent lodging later on. The giveaway is those sloping green walls on either side of the window. Adam’s room also has the same 2-foot-high base of wood paneling running around the room. The main difference is that the fireplace at stage right has been removed, and a small alcove created where Adam’s bed is. The added space without the fireplace gives the impression of a larger and therefore different set space.

“In episode 539, when Carolyn first shows Adam the room, we see that it even has the same bright sea green door as did Angelique’s and Peter’s rooms. At some point, they just change it to the type of standard wood-colored door that we tend to associate with that room.

“We’ll next see this set redressed — and filmed from a different angle — in episode 632, when Chris Jennings makes a room-service meal out of Mr. Wells the hotel clerk.”

Tomorrow: The Trouble with Harry.

12 thoughts on “Episode 542: The Diary of Anne Frankenstein”