“I don’t want to understand about those things; they scare me.”

Okay, here’s what’s going on: I have entirely no idea.

I know that Angelique, spurned lover and secret sorceress, is currently in residence at Collinwood, posing as Roger’s innocent new wife, Cassandra. She’s come to wreak a terrible slow-motion vengeance on reformed vampire Barnabas Collins, and she’s spent weeks and weeks lobbing a hex that never quite landed. And that is pretty much the beginning and the end of the list of things that I understand about what Cassandra’s doing right now.

It’s not just me, either. The writers have had the better part of three months to figure out what they were going to do with Angelique after the Dream Curse storyline. They have not used that time effectively.

So now we get to watch one of the great spectator sports of Dark Shadows, as Ron Sproat struggles to figure out who these people are, what they’re doing here and why we’re looking at them, as he types the dialogue on pieces of paper that are hand-delivered to the set just in time to throw them up on the teleprompter.

All right, that’s an exaggeration, but not by much. Soap operas work pretty close to the edge, because they have to react to events that are always just outside their control — an actor decides to leave the show, a romantic pairing that looked promising turns out to be a dud, or the entire country suddenly goes bananas over a vampire character who ran out of storyline four months ago.

Even for a daytime soap, Dark Shadows was spectacularly under-resourced, because they only had three writers, and they were expected to produce spectacular visual surprises every couple of days. These three guys had to produce two hundred and sixty half-hour scripts per annum, each one using a maximum of six actors and four sets a day, without a single break all year except for Thanksgiving, Christmas and the occasional assassination.

So they’d skid around corners, with no particular goal in mind except to get through the day. It didn’t much matter where the runaway train actually went, as long as they kept stoking the engine.

Cassandra:  And then — there was Barnabas, taunting me. I don’t understand.

Nicholas:  That’s obvious. It is also obvious that you’re an amateur, Cassandra. And that sort of thing can not be tolerated.

Nicholas:  There are no pleases about it; it’s gotten to be too big a game for you. It’s time it was taken out of your hands.

They’ve been doing this dance for a month now, with Nicholas helping, insulting and threatening Cassandra at regular intervals. And we still don’t actually know who he is; the only thing that we know for sure is that he’s not her brother. That’s playing it pretty close to the chest, for a guy who’s clearly becoming the show’s leading antagonist.

Luckily, they’ve got Humbert Allen Astredo in the role, and he is exactly nine and a half percent more charming and hilarious than he even needs to be. In the early 50s, Astredo was a comedian performing in USO shows, on the front lines of the Korean War. He is scared of exactly nothing on this earth, and he is giving a master class in how to keep the audience’s attention.

Every line that Nicholas delivers is an individually-wrapped performance. He whispers, and growls, and purrs, and does everything he can think of to keep the scene lively.

They can use all the distractions they can muster right now, because I’m pretty sure that they haven’t the faintest idea why he’s standing in this room right now.

Nicholas:  Find that “intervening force,” as you put it. Now, for someone of your talent, that should be child’s play. I’ll give you ’till midnight.

Nicholas:  You will call me when you discover why your idiotic plan went wrong. If I don’t hear from you, I’m afraid our little bargain — our “pact” — is off. We’ll have to dispense with your services.

The introduction of the word “pact” is helpful here. We don’t really know anything about the relationship between Nicholas and Cassandra so far, except that he’s more powerful than she is, and he granted her the opportunity to come back from the dead and pursue her vendetta against Barnabas.

Calling it a pact doesn’t give us any real information, but it implies that there’s something back there, behind the curtain.

And this is pretty much the moment when they need to muster up a reveal somehow. You can get away with the “mysterious stranger” wheeze for as long as you like, as long as he’s fun to watch, and there’s an actual lead storyline in progress. So far, we’ve been happy to allow Nicholas to stand around smirking on the sidelines, because he hasn’t had to carry the storyline yet.

But this week, the Dream Curse story finally shattered into a thousand disappointing pieces, just like we always figured that it would, and Nicholas finds himself front and center on a show that doesn’t actually have that much else to offer right now.

That means it’s time for a certain young Ronald Sproat to ante up, and let us know who the hell this guy is, and what he wants, and why we should care.

He doesn’t, of course, because it’s Sproat, and nobody trusts him to make the big decisions. Instead, he gives Cassandra a skeleton hand, which I suppose will have to tide us over for the weekend. Wave goodbye to the folks, Cassandra. See you Monday.

Monday: Death of a MacGuffin.

In act 1, Cassandra tells Nicholas that Willie “must know everything that happened after my Dream came — Curse came to an end.”

When Cassandra dismisses Willie, she says, “All right, Willie, you can go back to Collinwood now.” They’re already at Collinwood; she means the Old House.

After Willie leaves Cassandra on the terrace, the camera shudders as it follows her.

On the terrace, Nicholas tells Cassandra, “When the clock strikes nine, I shall return to you. If you have been able to un — if you have been unable to obtain the information… I will destroy you.”

When Cassandra tells David to go to bed, the camera bounces and up and down while it’s on a shot of David.

During the end credits, the fountain has been moved right up to the railing, beside the terrace stairs.

Monday: Death of a MacGuffin. 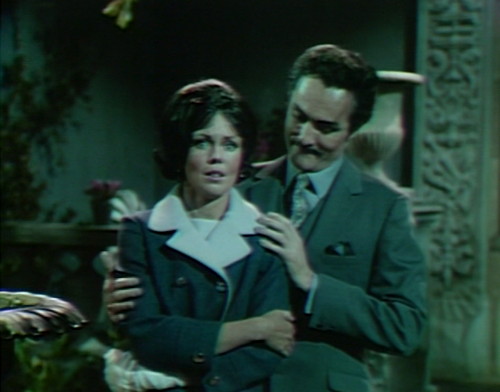