“My dear Cassandra, how commonplace you have become, like some suburban housewife with little human worries.”

Jeff and Vicki are in the drawing room at Collinwood, just chattering away about old business. Jeff can’t figure out whether he’s Peter Bradford or not, and he grumbles that Barnabas is in love with Vicki, and he doesn’t understand why Professor Stokes thinks this Dream Curse is so dangerous. It’s a pageant of every boring B-plot we’ve been looking at for months.

Meanwhile, out in the gazebo, Nicholas Blair is entirely over it. “All the time you have wasted, Cassandra,” he says, summoning her to the gazebo. “Weeks are minutes to you.” And we fall in love with Nicholas all over again.

I’ve been having new-character crushes like this for a while now; this is the third character I’ve fallen for in a couple months. Adam showed up in May, and then Professor Stokes had that amazing run in June, and now it’s July, and I’m all about Nicholas.

This actually violates all the known rules about soap operas, where the fans are typically suspicious of newbies coming in and stealing the focus away from the established characters that we love — but this show has been turning out rock stars lately. It’s a weird thing to say about Dark Shadows, but I think they might be getting good at this.

So here’s Cassandra, all upset because her tedious Dream Curse storyline has stalled just short of the finish line. The dream was supposed to be passed from Sam to Vicki — and then from Vicki to Barnabas, the real target of the curse. But Sam died without telling Vicki about the dream, and now Vicki is planning to leave Collinsport.

Nicholas listens to all of this with barely-suppressed contempt. “My dear Cassandra,” he sighs, “how commonplace you have become, like some suburban housewife with little human worries. How much time and energy you have wasted on this Barnabas Collins.”

Stung, Cassandra snaps, “Don’t start that with me again!”

And — oh, dear. You don’t say things like that to Nicholas Blair. 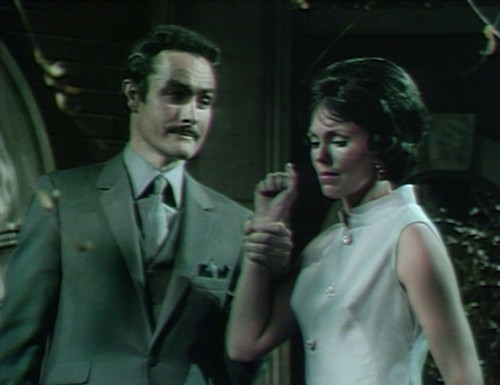 He rises to his feet, reaches out, and grabs hold of her wrist. His voice is as smooth as the purr of a contented housecat.

Nicholas:  I am not Roger Collins. I do not care whether I hurt you or not.

Cassandra:  Let go of me!

Nicholas:  I will let go of you when you remember why you are here.

Cassandra:  I am here because — you allowed me to come.

He loosens his grip, releasing her.

So there’s my challenge for the day — to find a way to express how much I like that moment, without using the word “pimp” in a positive way.

Because obviously, as a citizen of the 21st century who’s generally well-disposed towards women, it’s not really okay for me to like this scene as much as I actually do. This is a guy with power, threatening a female underling with physical violence in order to bring her to heel.

Yes, he’s a villain, and villains are supposed to do scary and terrible things, so I don’t actually have a problem with Nicholas doing something objectionable. I’m just trying to figure out why it makes me so happy.

Part of the reason is that it’s Angelique, who’s been clearly defined in the narrative as an enemy combatant. This wouldn’t be the same if NIcholas was threatening an innocent civilian, like Carolyn or Maggie. He’d still be within his rights as a villain to do villainous things, but we wouldn’t admire him or think that he’s being cool.

But this relationship is actually a reference to a genre that is the very definition of cool — film noir, and specifically The Maltese Falcon. This is Sydney Greenstreet making a deal with Mary Astor, a tough-as-nails dame who only acts like a helpless woman in order to lure someone into a murder plot. She’s chosen to live in a particularly harsh and dangerous world, so if things turn sour and violent, as they obviously will, then you’re not necessarily a monster for appreciating a little light misogyny.

I think the Maltese Falcon reference might be deliberate here. This is a Sam Hall script today, and he has a history with the hard-boiled. His first episode, back in November, introduced crusading lawyer Tony Peterson as a dead ringer for Humphrey Bogart’s Sam Spade. It wouldn’t be a surprise if Hall’s powerful conspirator character is borrowing some moves from Greenstreet.

So look at this scene through the lens of film noir, where a murderous femme fatale is called out by a heartless, charismatic crime boss.

Nicholas:  I listened to your pleas; it will take so little time, you said. He has escaped me, and that must not happen. You even pointed out what a bad precedent it set. But it has taken you so long.

Nicholas:  I think you like it here. I even think you would prefer to go on just scaring Barnabas Collins, teasing him.

Cassandra:  No! That’s not true.

Nicholas:  Why is he not as he was before, then?

Cassandra:  It’s not my fault that Sam Evans died. If he had lived, he would have told Vicki the dream, and she would have had it and told it to Barnabas.

Nicholas:  A little obstacle like death can stop you?

Cassandra:  Vicki will have the dream tonight… if she stays at Collinwood.

Nicholas:  Then make her stay.

Cassandra:  I need your help.

Nicholas:  I have very little interest in this tawdry affair. I let you come back for your vanity’s sake, and it has undone you. You cannot even stop a girl from leaving a house.

So here’s Sam Hall doing the thing that we love the most about him — he’s analyzing what’s broken about the current storyline, and taking the appropriate steps to fix it.

It’s not Cassandra being criticized here; he’s calling out the entire storyline. She’s been in the present day since April, and so far, the only things she’s really accomplished are marrying Roger and making Sam go blind, neither of which are mission-critical. She kicked off the Dream Curse two months ago, and the only real consequence is that now it’s two months later.

Nicholas is looking at the woman who drove the 1795 storyline single-handed, transforming the entire history of the Collins family into an extended kaiju battle between Barnabas and Angelique. He is speaking for the audience when he tells her how disappointed he is in her recent performance.

Now, this metafictional critique wouldn’t actually be satisfying if he was simply sneering, and not presenting us with a strong alternative. You can’t just show up and declare the last three months a waste of time unless you have something to replace it with.

So the dialogue is studded with delicious little hints that there’s a larger game that we want to learn more about. This is the key to film noir suspense, a series of patient reveals where the audience learns that what they thought they knew was just a cover story, masking a much darker truth. The suspense is built on the audience knowing that something big is going to happen, but having only the vaguest idea what it could possibly be.

“I will let you go when you remember why you are here,” Nicholas said, and then they side-stepped with her response: “I am here because you allowed me to come.” There’s no real content to that as an answer; it just adds a little shading to the question.

Nicholas has a plan, and Angelique’s revenge plot — which has powered the entire storyline for the last seven months — is just an insignificant distraction from the actual story. The stakes are being raised, but we only have the smallest clues about what’s really going on. 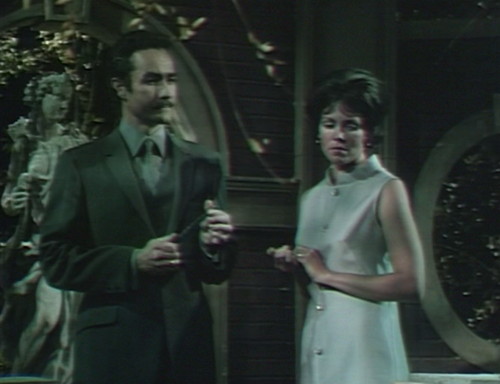 This is the key line: “It will take so little time, you said. He has escaped me, and that must not happen. You even pointed out what a bad precedent it set.”

A bad precedent… for who? That word implies that there are entities that are watching this situation, a wider community of people like this. Who could they possibly be?

We’ve seen little hints that there’s a larger world of witchcraft out there — Bathia Mapes showing up to battle Angelique, Professor Stokes telling Barnabas that his talisman protected a family from witchcraft for five hundred years — but they were presented as individual, small-scale outbreaks of wickedness.

The word “precedent” means that witchcraft is like organized crime, an environment where you earn your reputation as a killer. Roger Collins is married to the mob.

“Like some suburban housewife,” Nicholas sneers, on a show largely aimed at housewives, “with little human worries.” The story that we thought we were watching isn’t the real story at all. Nicholas has raised the stakes, and you know what a raised stake means to a vampire.

In the teaser, when Jeff tells Vicki, “Don’t go!”, we can hear something drop in the studio.