On June 17, 1968, at approximately 3:30pm, an unidentified Caucasian male suspect entered the Evans cottage. Mayhem ensued. Police are looking for a tall, dark man with a limited vocabulary and an even more limited wardrobe. But, hey, who isn’t?

It’s important that we get these facts straight, because we’re going to be talking about it for most of the week. After more than a month of basically just wandering around, our Frankenstein monster jumps into what is probably the longest extended action sequence we’ve seen so far on Dark Shadows.

Adam was brought to life by Barnabas and Julia in an ill-advised burst of mad science, and he’s spent most of his time being tragic and misunderstood. Now, he says those magic words that we’ve been waiting to hear — “KILL MAGGIE!” — and he finally becomes the unstoppable force of fury and destruction that he’s been destined to be. 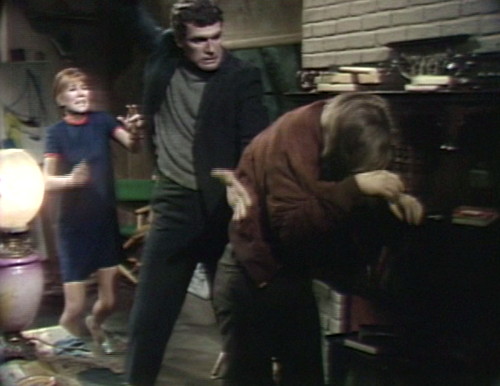 Well, maybe. The show is struggling right now to figure out what to do with Adam. He begins this particular contretemps by shouting “WILLIE BAD!” — he’s still using the classic Quest For Fire syntax — and smacking his former captor across the face.

Trying to reconstruct the events after the fact, I can’t quite recall what makes Willie so bad. The worst incident that I can recall is that Willie did a weird Tennessee Williams monologue, and then ate some of Adam’s dinner. He wasn’t a very good babysitter, sure, but that’s not necessarily worth a fatal beatdown. 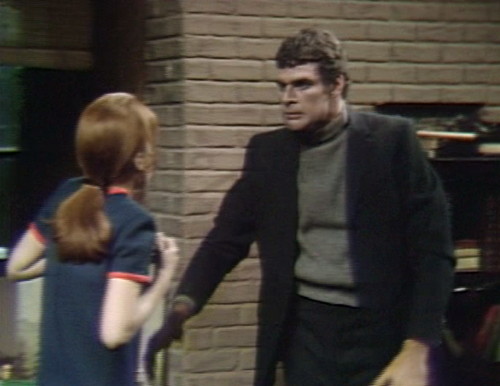 They’re still playing the “Adam is confused” card, although it’s not clear what he’s so confused about. He’s been treated in a fairly consistent way. When he’s calm, people are generally nice to him; when he’s enraged, people hit him with sticks. Even a newborn Frankenstein man ought to be able to piece that puzzle together.

But then there’s the girl-touching thing. They’ve been road-testing the idea of a Beauty and the Beast plotline, first in an extended sequence with Carolyn, and now with Maggie. I can’t say that it’s going very well.

The tricky part is that after it all blows over, you need the girl to say, “He was so gentle, really, like a confused child,” because obviously every girl wants to date a confused child. The problem is that the gentle behavior mostly consists of staring into the girl’s eyes and touching her hair without permission, two seconds after she’s seen him knock somebody to the floor with a snarl. He’s not exactly a dream date, unless you like being manhandled by a menacing 6’6″ ex-convict. Actually, that doesn’t sound so bad.

By the way, doesn’t he look nice today? Adam jumped off a cliff last week, tearing up his clothes and his face pretty badly, but he seems to have spontaneous healing powers that include his wardrobe.

I think that’s a new turtleneck, too — it used to be black, and now it’s gray. I wonder where he got it from. Somewhere in Collinsport, there must be an unconscious, naked basketball player, and I vote that we go and look for him.

The problem is that they’re really struggling to figure out what Adam wants at this point. He’s just a mess of contradictory impulses. He wants to hurt Willie, he wants food, and he wants to look at shiny things, pretty much all at the same time.

It’s not clear what you can do with him, except spin him around and see if he damages somebody. Still, there’s no way the audience will ever be able to forgive him if he hurts someone we like. If he’s going to seriously injure somebody, then they need to find a character who isn’t very likeable or interesting.

So let’s bring in today’s victim, Sam Evans. Recently, David Ford asked the producers to make his character blind, so he could read off the teleprompter and not have to learn his lines. This brilliant strategic move seems to have backfired, because he has to wear dark sunglasses and he can’t really read through those lenses very well anyway. I think everyone recognizes that it’s time for Sam to go, up to and including the audience.

Still, there’s a chance this might work out okay. Since going blind, Sam has become a magical charity elf who can soothe the savage beast. He speaks calmly to Adam, and it looks like he might be able to solve this crisis. 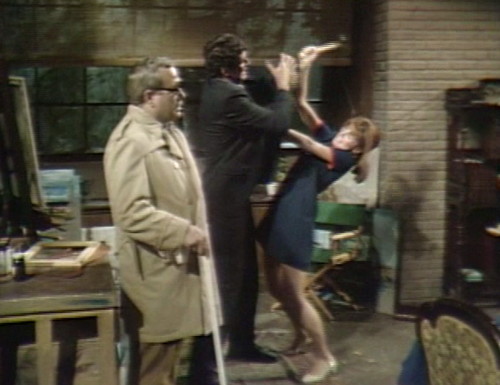 But Maggie’s scared for her father, so she grabs a nearby hammer and gets to work. Adam is supposed to grab her arms, but she actually manages to clock him on the head once, so I hope that’s a Nerf hammer.

Sam manages to get between Adam and Maggie, and tries to open negotiations.

Sam:  Adam, don’t you remember? You remember who I am. I’m your friend. Now, you wouldn’t harm me, would you?

Sam:  Maggie is my friend.

Sam:  Adam! Repeat after me!

Things deteriorate fairly quickly from there. It’s your standard enormous corpse-monster vs. blind guy cage match, which ends pretty decisively with a knockout punch. Adam heads outside for an anguished “Adam afraid!” moment, and then there’s nothing to do but call the villagers and tell them to round up some torches and pitchforks.

The opening voice-over says, “A chain of events has been set into motion, and they will end in a burst of violence and a sudden death.” The death in question isn’t actually very sudden; Sam is hurt today, but he doesn’t die for another three episodes.

Willie was wearing a light gray jacket in the last episode; today, it’s a brown jacket. The episodes are being taped out of order right now, and this episode was actually recorded two weeks after the last one. (Episode 514 was taped on May 27th, and episode 515 on June 11th.) So it’s not surprising that they couldn’t remember what Willie was wearing. Also, nobody cared that much.

Willie tells Julia that Adam “broke into the Evans Cottage tonight, and he may have killed Sam Devans.”

The rolling credits were crooked in the last episode. Today, they’re still crooked, but in the other direction. 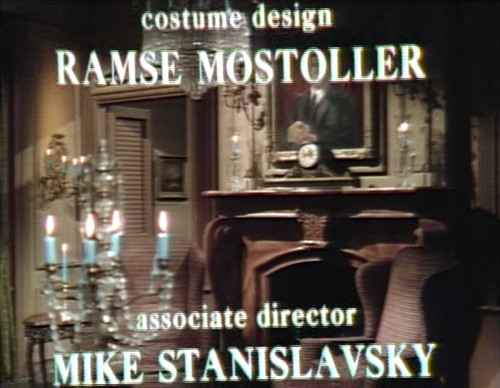