“Germs — I’ve never been a big believer in them, but they do exist.”

A couple weeks ago, grouchy painter Sam Evans was struck blind, following an encounter with a witch that I don’t have time to get into right now. In a normal soap opera, a character going blind would be a huge focus for the show for months. We’d see all the doctor’s visits, they’d be trying out experimental treatments, and the character would go through a lengthy grieving process as they adjust to the loss of their sight.

But I don’t know why I even bother to bring that up anymore. I might as well say, “In a beach party movie, Annette Funicello would be singing about surfboards.” We may have reached the point where comparisons between Dark Shadows and normal soap operas are no longer relevant.

The behind-the-scenes story here is that David Ford, who plays Sam, requested that his character go blind, so that he could wear sunglasses and read off the teleprompter. Ford was one of the handful of Dark Shadows actors who really had a hard time memorizing all of his lines, and this was his clever plan to stay on script.

At the start of today’s episode, Sam comes home to find a huge, murderous Frankenstein in his house. Sam calls out to him.

Sam:  Who is it? I know someone’s there. I can feel your breathing.

So I guess that strategy didn’t really work. What should we try next?

Adam survived last week’s jump off Widow’s Hill, by the way. He’s a little banged up, and there’s definitely some wear and tear on the turtleneck, but it looks like we now have a character who can survive just about anything. We should go drop him off something else, and see what happens.

But I guess we don’t have time for that right now, because Sam is transforming before our eyes into a magical charity elf. This is fairly common among fictional people with some kind of handicap. Apparently, having a physical disability or a mental illness gives you an uncanny sensitivity to other people’s pain, coupled with an urgent need to assist passing protagonists. If the character combines either of those traits with being really old, homeless and/or African-American, then there’s a better-than-average chance that that character is actually God. 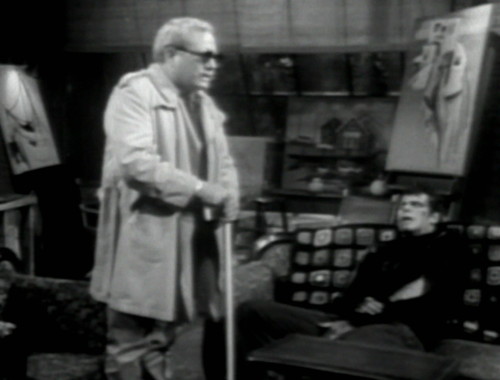 So Sam isn’t super bothered by the fact that there’s a huge, injured, practically mute intruder in his house. He just sits the guy down, asks his name, and goes for the hydrogen peroxide.

Still, it’s nice that Adam’s getting out, and meeting new people. So far, the storyline has depended on keeping Adam out of public view, which isn’t very story-productive. If Barnabas, Julia and Willie are the only ones who even know that Adam exists, then everybody else can just go about their daily lives, and it’s not a very high-impact story. If turning Sam into a Robin Williams character moves the story along, then I suppose we’ll have to go with it.

The bonding scene is interrupted by the arrival of Professor Stokes, who is apparently now licensed to stick his nose into every single storyline.

Stokes has recently become one of the Dark Shadows kaiju, the powerful giant monsters who stomp through the show and destroy everything in their path. He’s come over to talk about the Dream Curse, but he’s perfectly happy to get mixed up with Adam too. Curiosity is his superpower.

Spooked by the newcomer, Adam runs off into the night. Sam yells for him to come back.

Stokes advises, “I’m not sure I would call him, Mr. Evans.”

“But he’s in trouble,” Sam says. And then he pauses for seven seconds. 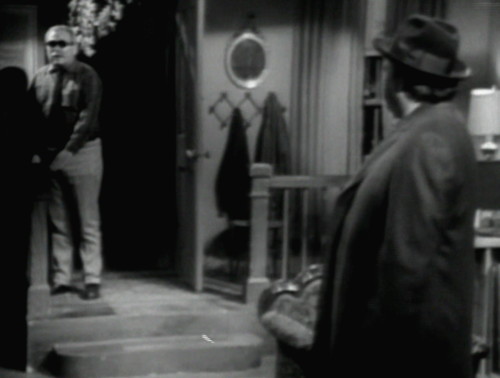 Taking another look at the teleprompter, Sam continues, “Serious trouble.”

“Yes, rather serious, I should say,” Stokes agrees, with the implacable calm of a man who’s willing to wait seven seconds for his cue. 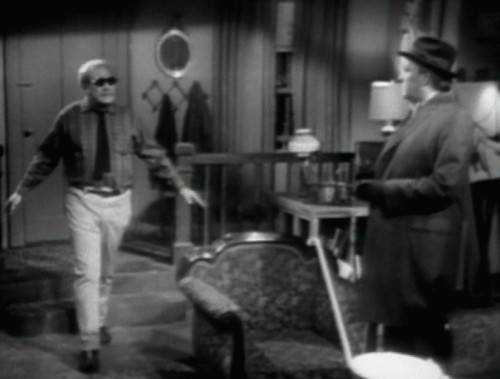 But I suppose dead air isn’t much of a concern, because he only came over to talk about the Dream Curse anyway.

The Professor says, “If you should have a dream which begins with a knock at the door, and a man — probably Barnabas Collins — gesturing you to follow him, will you please call me at once?”

Sam waves him away, like people ask him this kind of thing all the time, and he’s sick of it.

Stokes:  I am most serious, Mr. Evans. A man’s life may depend on that.

Sam:  And Adam’s life may depend on his coming back here tonight!

Stokes:  Yes, yes, Mr. Evans! But I shall say this, and nothing more. In Adam’s case, there is not a witch involved! Good night, Mr. Evans.

Stokes shoots him a look — completely lost on him, of course — and walks out. And presumably Sam is now free to spend the rest of the day as he pleases.

When Cassandra hands Tony the Coptic cross, someone in the studio coughs.

Thayer David (Professor Stokes) is not listed in the credits.

This episode’s master tape was damaged, and it was skipped in syndication — the distributor, Worldvision, didn’t realize that there was a black and white kinescope copy. The kinescope was found when DS was licensed to MPI for home video release in 1989. Out of the 1,225 episodes, there’s only one that’s actually missing — episode 1219.

After this one, there’s only five more kinescope episodes — we’ll see the next one in July 1969.