You know that you’re in for a good day on Dark Shadows when the episode opens with everybody who has a speaking part all standing in a line and facing the teleprompter.

That means two things: there are four people on a cramped set that can really only accommodate one and a half, and the actors can’t memorize their lines because the things that they’re supposed to say don’t mean anything. In other words, it’s a Ron Sproat script today.

The vampire looks down at the mute, sleeping Frankenstein who’s been stashed in the dungeon cell of their haunted house. Then he uncorks the Fridspeak.

Barnabas:  If I did not know what horrors we commit, even in our dreams, I’d say all malice and evil leave us when we sleep. How gentle he looks, at times like this.

Julia:  I wouldn’t stand too close to him. He’s apt to wake up any minute now.

Barnabas:  Brute force incarnate… disguised now as one of Earth’s most gentle creatures.

Is he, though? I’d say that particular description is 0 for 2, but you can’t keep score on days like this.

This is Adam, by the way, the show’s new man-monster, who just opened his eyes two days ago. In yesterday’s episode, they established that Adam is like a small child, who needs to be cared for and raised to be a good, loving human being. That’s why they’ve put him in the basement, behind a locked steel door.

Now they’re briefing the babysitter, Willie, the servant who was just sprung from a mental institution a couple weeks ago. I know, it’s a weird show.

Julia:  Stand away, he’s waking up — and we have no idea what he’ll do.

Willie:  You told me he was harmless.

Willie:  Well, then why are you both so afraid of him?

Okay, you just said he was brute force incarnate. The show’s been on for, like, a minute and a half so far, and you’re already issuing retractions on previous lines of dialogue. It’s no wonder everyone’s looking at the teleprompter — even Julia, who’s usually able to keep track of what she’s supposed to say from one moment to the next.

It’s Willie’s first day as nanny to the giant, ferocious patchwork man, and he’s not making a good impression with the parents.

Barnabas:  If you show fear, it communicates itself to him, and he is also afraid.

Julia:  Well, he reacts the way any creature will do who’s afraid.

Willie:  Oh, you mean he runs away.

Barnabas:  Dear Willie… don’t judge everyone by your own standards. The natural reaction is to strike out.

Willie asks what they did to make Adam strike out before, and Barnabas and Julia both roll their eyes and sigh theatrically. 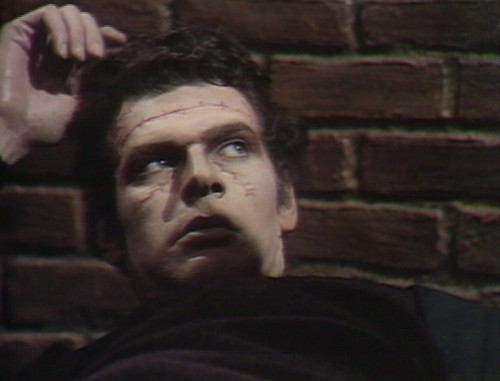 But never mind the safety lectures — the monster is regaining consciousness.

“We have brought you to a new home,” Barnabas says, indicating the filthy, windowless cell. Adam is clearly delighted.

And check out the body language, as they introduce Adam to his new babysitter. I’d say “get a room”, but they already did, and this is it.

But there’s no time for introductions, apparently. Jula says, “Come, Barnabas. We’d better get going,” and they head for the door.

This is entirely baffling. Where the hell are you going? What could possibly be a higher priority in your life right now than spending time with your enormous new child? 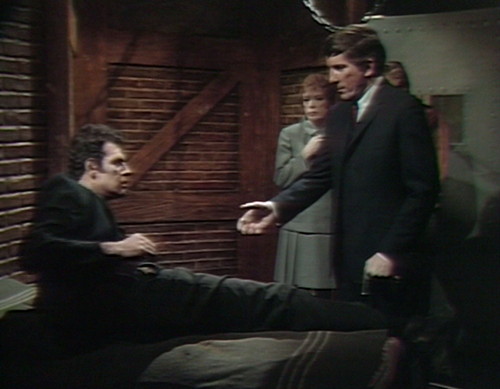 Barnabas tells Adam, “I will come back and see you. Goodbye.” And then he holds out his hand, for Adam to shake.

Adam cringes. He has no idea what’s going on.

Barnabas adopts the tone that you use when you’re talking to someone who doesn’t understand English, probably because they’re lazy and they’re just not trying hard enough.

“This is a custom that we use when we wish each other well at parting,” he says, enunciating clearly, like that’s the problem. “Now, give me your hand, Adam.”

So this moment makes a couple things snap into place. Let’s think for a moment about the mentality of a man who’s faced with a newborn creature from beyond the grave, and decides that the most important skill that Adam should learn right now is how to shake hands.

These are your standard aristocrat “The Sun Never Sets on the British Empire” rules. In this worldview, children are just like foreigners — they can’t speak properly, and they require a certain firmness of purpose when teaching them table manners, but in all other respects, they deserve to be treated with the same patience and understanding as our pets, our servants and our houseplants. The basic hierarchy here is that well-bred white people are at the top, and everything else from immigrants to sea life is basically a lateral move.

So this is what you do, if you’re the dad from Mary Poppins. You don’t actually raise your children; that’s what servants are for. Inconvenient relatives can be deposited in the attic, or in the inexplicable prison cell that you maintain in the basement.

But Ron Sproat loves this prison cell. He’s the last writer on Dark Shadows who remembers the days when stories were slow and graceful, like glaciers. And there’s nothing that fills up screen time better than keeping someone in a room, and then worrying about what might happen if they ever get out.

The last time we gave Sproat a run of episodes, he put Vicki in jail for three months. He’s also trapped David in the mausoleum for a week, put Josette under house arrest, and kept Maggie in this very cell for the entire summer of ’67. 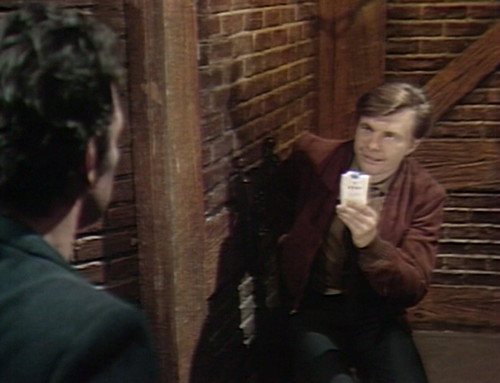 Naturally, as soon as the parents leave the room, the very first thing Willie does is light up a cigarette. This is hard-coded instinctual behavior that comes naturally to all babysitters. Next, he’s going to spend an hour on the phone, as he rifles through the liquor cabinet and the medicine chest. 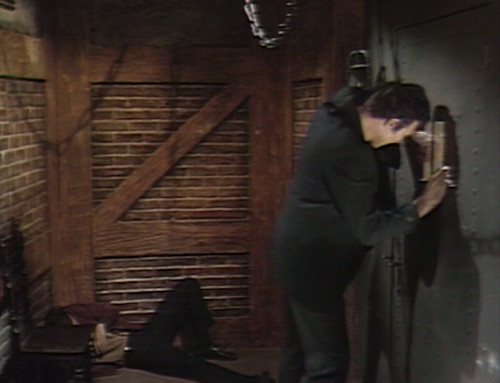 And then obviously, it all goes terribly wrong. Adam grabs for the cigarette, burns himself, knocks Willie into the corner, and makes for the exit.

Now, everyone in the audience knew that this was coming — you don’t leave Willie in charge of your incarnation of brute force without expecting the occasional jailbreak. The remarkable thing is that this happens less than ninety seconds since Barnabas and Julia left the room. Willie’s monster-sitting career doesn’t even make it through the first commercial break.

In 1967, this would have been a solid week of episodes, and they just compressed that into a minute and a half. The pace of the show has changed completely.

But don’t tell the leisure class about that; they’ve got all the time in the world.

When we see Julia, she’s sitting in the Collinwood drawing room, reading a book and taking notes. We don’t get to see what she’s looking at, but I hope it’s parenting advice.

But I really shouldn’t be complaining, because leaving Willie in charge means that the monster gets to roam around on the Collins estate, which is exactly what we want to see.

Adam is a great character, because he automatically changes the story just by walking onto a set. Nobody knows that he exists, so if anybody sees him, we’re going to have trouble. He’s the plot point that walks like a man. 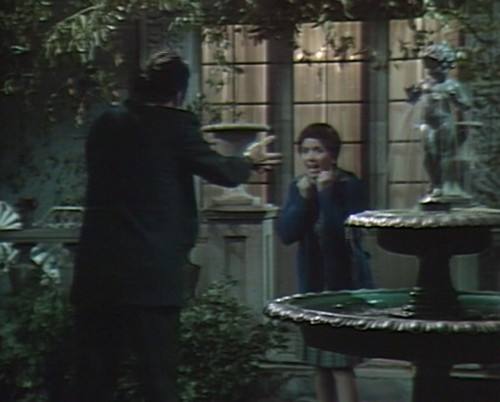 Naturally, pandemonium ensues. He wanders onto the terrace at Collinwood, and once again, the working class comes face-to-face with the forces of darkness.

Mrs. Johnson, the Collins family housekeeper, hears a noise outside and comes to investigate. Finding a stranger on the mansion grounds, she says, “What do you want? You don’t belong here!”

Now, they were just explaining to Willie that the fight-or-flight instinct is common to all living creatures, but apparently that does not apply to the domestics.

Mrs. Johnson goes for the third option, which is to stand entirely still and yell, “Help! Somebody help me!” 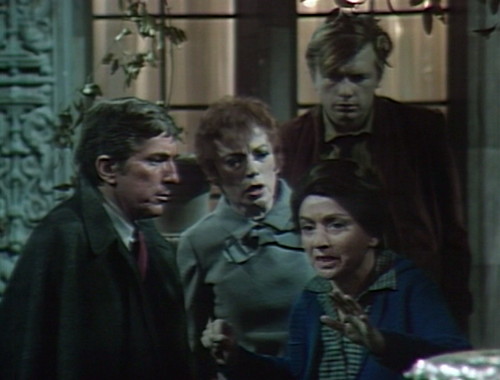 Luckily, a passing aristocrat hears her cry for assistance, and the savage runs away in terror, as savages so often do.

I know, I’m hitting the “class war” angle pretty hard today, but seriously, that’s what this episode is about. When the men run off in pursuit of the creature, Julia sits down with Mrs. Johnson and acts patronizing.

Julia:  Now, Mrs. Johnson, you’ve been terribly upset, and your imagination’s running away with you.

The housekeeper insists that she saw a monster, and Julia sniffs, “It was probably just a vagrant.”

I swear, if I was in the mood to give a damn about left-wing Marxist lit-crit theory, I could work this up into a Modern Culture and Media paper that would knock you sideways. 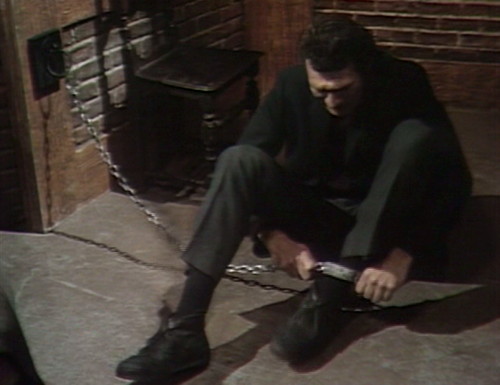 Workers of the world, unite! You have nothing to lose but — holy cow, he really does have chains. I guess there’s no such thing as subtext anymore. Well, that ought to save me some time.

Tomorrow: To Your Teeth (Varney the Vampire, part 3).

Barnabas loses his grip on his lines when he’s leaving the cell.

Willie:  What do you mean?

Barnabas:  Your only safety — is to talk to him. Keep an eye on him. Talk to him, and be friendly. And nothing will have… given you any fear. Either from him, or from me.

Tomorrow: To Your Teeth (Varney the Vampire, part 3). 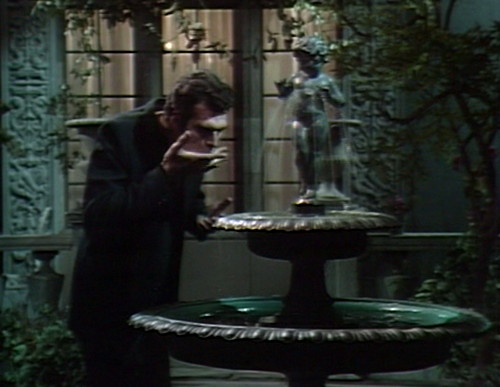