“We cannot be inundated with people you have met in the past!”

Angelique Collins — soap vixen, she-devil, champion of evil and destroyer of worlds — has torn the veil asunder and returned to this mortal plane, to bring ferocious plutonium-studded revenge to the family that wronged her. She accomplishes this by dropping a not-very-convincing black wig on her head, changing her name, and showing up at the house to see if anyone recognizes her.

This is not exactly the silliest thing that she’s ever done — she turned a dude into a cat last year, which is hard to beat — but it’s in the top three. It’s kind of like robbing a convenience store, shooting the cashier, and then showing up the next day to apply for the vacancy. I’m pretty sure they remember what you look like. 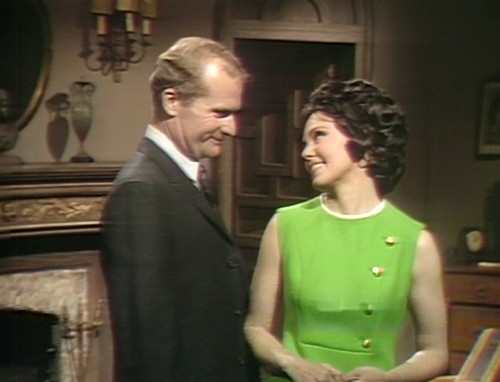 But Angelique — or Cassandra, if we must — has a capacity for recklessness usually reserved for the protagonist of a Grand Theft Auto game. And since Barnabas isn’t on the show today, she gets the whole episode to herself, and she takes the opportunity to establish how deeply scary she really is.

She’s hypnotized Roger and convinced him to marry her, even though they’ve just met and she’s at least 190 years old. That gives her a backstage pass to Collinwood, and a front-burner storyline. The thing that’s so reckless and marvelous about this plan is that it’s the opposite of stealth.

She could have found her way into the house in a less ostentatious way. She could have befriended Carolyn, for one thing, or snuck back in through the servants’ quarters again. Or she could have introduced herself as a family historian who’s writing a book about the Collins family; I hear that’s practically a ticket for a lifetime membership in the Collins houseguest hall of fame.

But no, she had to put herself in the one position where she was sure everyone would be staring at her — Roger’s mid-life crisis, in a sleeveless lime-green dress. 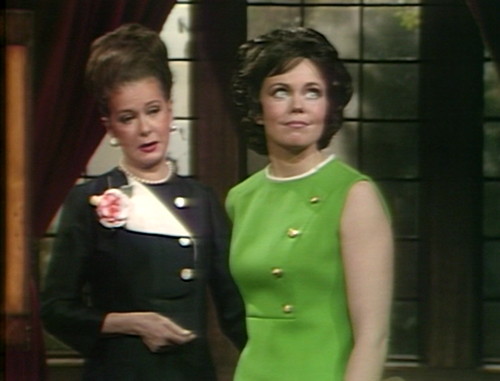 The clever thing about this plan is that Angelique is covering her tracks by pretending to be in a normal soap opera storyline. She’s Cassandra, the trophy wife, using her youth and beauty to ensnare a wealthy older man.

When Liz grimaces at Cassandra’s obviously exaggerated naivete, she thinks that she understands the shape of this story. She has no idea that she’s looking at the creature who practically exterminated her ancestors.

So here’s an example of how scary the new Mrs. Collins can be. Roger’s determined to take her away on a lavish honeymoon trip, which she has no intention of participating in. She’s here to torment her first husband, not sightsee with the second; the last thing she needs is to go on a round-the-world cruise, while Barnabas has a quiet month to stock up on anti-witch cream.

Roger refuses to listen, so guess what she goes and does: she arranges an accident, and sprains her own ankle. That’s how hardcore she is. Ankles mean nothing to her.

But that’s not the scary thing. The really scary thing about Cassandra’s plan is that Julia bandages her ankle, and as far as we can tell, she doesn’t suspect a thing.

Think about that. It hardly seems possible. Julia is the mythopoetic trickster figure who lies every time she opens her mouth; she practically invented getting into Collinwood under false pretenses. And look at her face! That smile is completely sincere; she’s delighted with this conversation. This is the most fun she’s had in months. 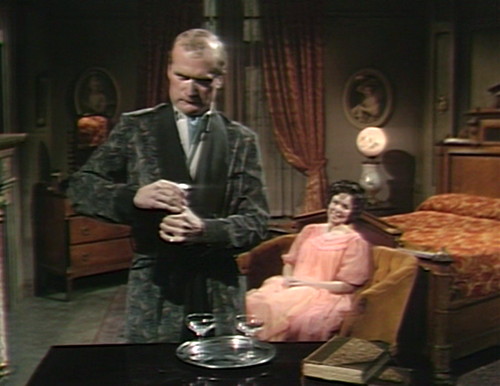 Although I suppose that’s not really scary, either — it’s thrilling, like doing a high-wire act over Niagara Falls, but there’s nothing to be scared of yet. Nobody’s in danger; nothing is really at stake. There’s just a happy pair of newlyweds, enjoying the beginning of their lifelong union.

He’s pouring some wine, so they can toast their first night together as husband and wife. When she complains about a twinge from her sprained ankle, he hurries to the other room to get her some painkillers.

And, naturally, while her doting husband is occupied, she drugs his wine with I don’t even know what kind of powder, which she keeps inside her ring.

You heard me. She’s wearing a ring full of secret voodoo knockout party mix, so she can drug her husband on their wedding night. This is the kind of crazy that Angelique brings to the table every god-damn day.

Once he’s had a taste of the knockout juice, things start to go downhill for Roger’s evening. He feels a headache coming on, and he goes to the window to get some air.

Looking out into the night, his head foggy, Roger — the real Roger, the one that we like — starts to break through.

Roger:  I don’t believe it.

Roger:  Oh… nothing, nothing.

He takes another gulp of wine.

Cassandra:  You said something. What? 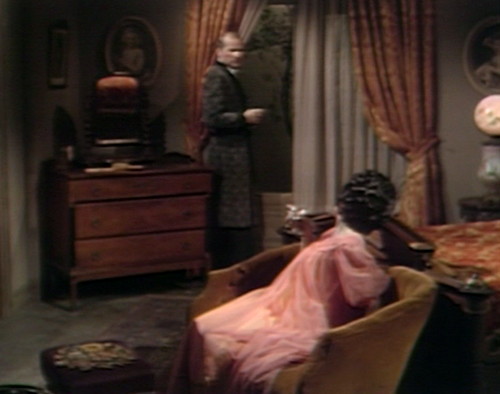 He turns to face his new bride.

Cassandra:  It sounded like, you don’t believe it. Did you see something outside the window?

Roger:  No… no. What were we talking about?

Roger:  Oh, yes. Of course. Well, we must decide where we’re going to live, whether here, or…

He staggers, and leans against the mantelpiece, staring into the distance.

Cassandra:  Why did you marry me? Is that what you’re asking?

Roger:  Well, yes, I suppose it is. Why did I? It’s insane. We barely know each other.

He turns to face her. He’s shivering.

Roger:  I’m sorry, my dear, to be so open, but all of a sudden, it’s… as if this entire day has been some sort of a dream, that I’ve just remembered.

It doesn’t last. She looks at him, and she reasserts control. But just for a moment, Roger looked directly into the cold, savage eyes of the creature that just tore a hole in what used to be his life. He saw the truth. He knew.

They walk through this world like lonely gods, Barnabas and Angelique, using the people around them as pawns in their endless, destructive, unfathomable game.

This isn’t thrilling for Roger. He is not thrilled. This isn’t silly, or camp. Roger is a good person, we like him, and he’s terrified. He’s suffering. And then she touches his face, and takes control of him again.

Liz walks into the drawing room to tell Roger, “There’s a long-distance phone for you, on the, uh, private phone in the study.”

When Julia bandages Cassandra’s ankle, you can hear footsteps and paper rustling in the studio.

When Julia sits down to talk to Cassandra, the boom mic pokes into the frame at the top left.

At the beginning of the scene with Vicki waiting in the garden, someone can be seen moving in the bottom left of the frame.

In Act 4, starting when Roger leans against the mantelpiece, there’s a reflection in the oval picture frame of the camera light moving back and forth.

Resident prop-spotter Prisoner of the Night says: “It seems that Roger and Cassandra’s room must be a redressed version of the Collinwood study. The fireplace has the same design with the pillars framing the hearth, the door and window are in the same location, and the wall at stage right has the same paneling. By episode 519, the bathroom door to the right of the bed is at a different angle, and the Ralston-Purina lamp is on a table to the right of the window in episodes 519, 521 and 522.” 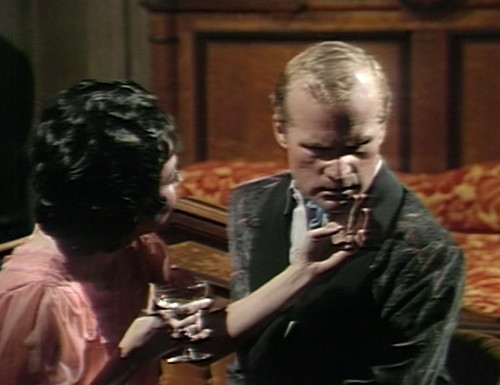