“You keep talking about secret rooms, and guns. It bothers me for some reason.”

And now, another tableau from our pageant of Great Moments in Fictional Health Care.

Victoria Winters was in a car accident the other day, and escaped entirely unharmed. But she’s been cooped up in a hospital bed for episode after episode, and she doesn’t even have a magazine.

She says to her doctor, “You are going to release me today, aren’t you?” The doctor smirks, and says, “Now, why be in such a hurry?”

So apparently this hospital encourages able-bodied patients to stay longer. Even for a vampire soap opera, that requires more suspension of disbelief than anything else on the show. I thought we were back in the 20th century.

Also, it’s never a good idea to begin your television show with a shot of a character staring at his watch. I know he’s taking her pulse, but it sets a bad precedent.

This is Dr. Eric Lang, by the way. He’s a brand new character this week, and he’s terrible, just shouty and off-putting, and he’s played by The Worst Actor Who Ever Appeared on Dark Shadows. Apparently, he wants to keep Vicki in the hospital so that he can feed her to his pet vampire. Or something. I don’t really pay attention to Vicki scenes. 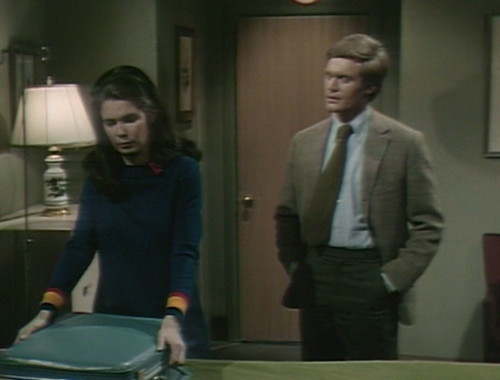 But in the next scene, she’s packing a suitcase, so I guess they’ve realized that they can’t detain her forever without a warrant.

Then Jeff Clark stops by. He’s another new character who looks just like Peter, the summer-break boyfriend that she met on a recent trip to the 18th century. Jeff also talks like Peter and scowls like Peter, and — not to put too fine a point on it — actually is Peter.

The show seems to be under the impression that this situation will hold the audience spellbound. But if Jeff isn’t secretly Peter, then there’s absolutely no reason for him to be standing in the middle of our television show, so this non-mystery is pure horseradish. I know I’ve complained about this plot point every day this week, but I’ll stop talking about it when they do. They started it.

So now we have to watch people say things like this.

Jeff:  You know, when I left here the other day, I thought to myself: Maybe I am Peter Bradford. Who knows? But if I were, I’m sure I’d remember you.

I just don’t know what to do with a line like that. I was under the impression that the characters on this show were supposed to be human beings.

Jeff offers to drive Vicki home, but then Dr. Lang strolls in, because apparently doctors have all the time in the world to chat with perfectly healthy people who are trying to fight their way out of the damn hospital.

Vicki introduces Jeff to the doctor, but a tension hook starts up that indicates these two already know each other. Lang tells Vicki that Barnabas would like to see her before she goes, so Vicki hurries off to the other room.

This begins one of the world’s awkward conversations.

Lang:  What are you doing here? I don’t want you hanging around the hospital. I want you to get back to work.

Lang:  You are NOT going to take her home.

Peter:  You have no right to tell me who I see, or who I don’t see. You know, I’m more of a prisoner with you than I was —

Lang:  Than when you were where?

Jeff turns away. This is actually very good, compact exposition, so you might as well have more of it.

Jeff:  Listen — let me just do this. She needs me. She thinks I’m someone else. Not Jeff Clark.

Lang:  Oh? Who does she think you were?

Lang:  Does that name mean anything to you?

Jeff:  No. But it may not just be coincidence. I may be able to find out something.

Lang:  Oh, why, why, WHY! Do you have any idea how many times you ask that question, and how IRRITATING it is!

So it’s kind of a confusing moment. Apparently, the situation that they’re setting up is that Lang is a villain, and Jeff is his uneasy henchman. But they’re not very good actors, and they’re both determined to be super intense about everything, so they’re sending off the wrong signals.

That last line — “oh, why, why, WHY!” — that’s not super-villain; it’s henpecked husband. I think we may have stumbled on the hospital’s summer stock production of Who’s Afraid of Virginia Wolff. 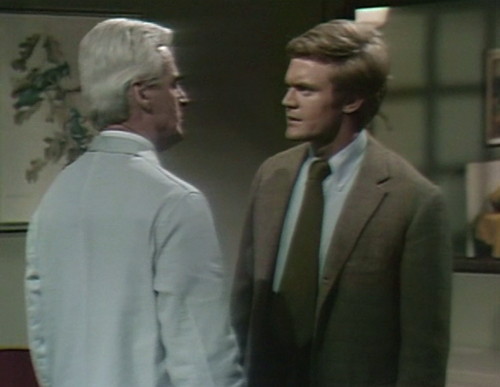 Jeff:  I don’t see why I can’t have friends.

Lang:  All you need is someone who doesn’t think you’re Jeff Clark.  I may have plans of my own for Miss Winters.

Jeff:  What kind of plans?

Lang:  You know, I don’t think I like your tone of voice.

Oh, for Pete’s sake. Why don’t you kiss him, instead of talking him to death?

So this is what happens when an actor doesn’t understand subtext. Look at the way he’s standing here, compared to his body language in the last scene.

At least he’s making it clear that he doesn’t have any romantic interest in Vicki; he’s just doc-blocking Jeff.

Having chased Jeff away, Lang offers to drive Vicki home, and then enages in some light interrogation.

Lang:  So if you can just wait a few moments while I make out this report, and then you can tell me about yourself.

Vicki:  I can never think of anything to say when someone asks me that.

Really? Cause you were raised in an orphanage, you were mysteriously summoned to Collinsport to work for a family you’d never heard of, your fiancee died in a plane crash in Brazil, and you were recently tried and hanged as a witch. I feel like there’s at least a couple decent anecdotes in there somewhere.

But that’s the problem right now — the show isn’t really investing emotionally in this set of characters. They just spent four months examining the secret history and motivations of the vampire, and the supernatural-aware characters like Angelique and Julia are well thought out, if bonkers. But nobody really cares who Vicki is; there’s no coherent sense of an interior life.

There’s actually a nice, quiet moment — which is super rare when Dr. Loud is around — when she has a second to reflect.

Vicki:  Of course, now I have the Collinses, and they’re very kind to me, but they won’t be needing me always. David is growing up, and one day he’ll go away to school.

Lang:  Mm hmm. And what will you do then?

Vicki stops short, and her voice catches a little.

There’s a piece of truth in there, an anxiety that should be a living part of Vicki’s personality, but then the scene ends and she just forgets about it. She’s confused and upset about her recent experiences in the past, but she doesn’t really think about her future, except when she has some dialogue that specifically addresses it. Most of the time, she acts perfectly cheerful and content, no more worried about her future than rich-girl Carolyn is.

Anyway, once she gets home, she decides that she needs to go to the Collins family mausoleum, to look for proof that she really was in the 18th century. She and Peter hid out in the mausoleum’s secret room after their daring jailbreak, and she wants to confirm that she didn’t imagine the whole thing.

And who do they run into but Mr. I’m-Not-Peter-Bradford.

He’s got a pretty thin explanation, too.

Jeff:  I frightened you, I’m sorry.

Julia:  Vicki, who is this?

Jeff:  I’m Jeff Clark. I shouldn’t be here. I don’t know why I am. I was taking a walk. It started to storm.

And then he just keeps on sleepwalking through the scene.

It’s funny — yesterday, I talked about how unbelievably fast the Barnabas story was moving, with Dr. Lang discovering a cure for vampirism in about ten minutes. But this is the B-story, and they’re apparently determined to stretch it out beyond human endurance.

I read an interview with a soap opera writer once, where he said that the hardest thing about his job is figuring out why characters stay in rooms. You have to write a scene where two people stand around on a set and talk for five minutes, when there is no earthly reason why they don’t just leave and go do something else.

That’s what’s happening here, and it’s fairly baffling. We just learned a few scenes ago that Jeff has amnesia. Vicki keeps calling him Peter, so this seems like the perfect opportunity for him to admit that his background is a little hazy.

But I guess we’re saving that for tomorrow, or next week, or whenever, so instead we get a vague “I don’t know why I’m here,” which is not dramatically compelling.

And honestly, this is the last thing that Vicki needs right now. She desperately needs to connect with something on the show, to ground her character and give her something to play. Pairing her off with an emotional void is not helpful. Stay tuned for more of the same.

At the end of the teaser, when Lang says, “A miracle of sorts,” there’s a bunch of offstage studio noise.

Jeff tells Vicki, “You know, you were very convincing, too. And when I left here the other day, and I started to, where I stay, I –” Vicki interrupts with “Where do you stay?” which is a relief, because otherwise he was going to choke himself on sentence fragments.