We’re now at day four of this “Vicki on the lam” sequence, with no end in sight. Vicki is still hiding in the secret room in the Collins family mausoleum, with a bullet hole in her shoulder and a price on her head. She’s acquired a ten-year-old, Daniel, who’s also on the run, because Nathan is paying Noah to kill Daniel so that Nathan can get his hands on Millicent’s money, and so on. It’s all fairly dreary, and there isn’t a vampire in sight.

The good news is that Noah, the speed bump who walks like a man, is going to be shot and killed today. The bad news is it takes about twenty minutes to get there, and there’s nothing we can do but wait. 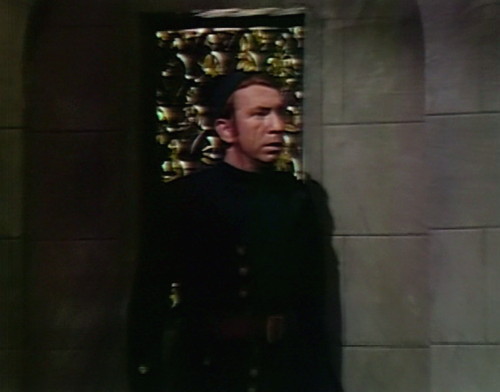 So first we have to watch Noah examining the mausoleum, fruitlessly. Vicki and Daniel are perfectly safe, hidden behind the secret door. Noah may have seen Daniel run towards the mausoleum, but the panel was closed long before he came in, and we know there’s no way he’s going to figure out where the boy is. But we still have to watch him walk around the room for a minute and a half, touching the walls.

This is a runaround today, one of my least favorite kinds of episodes. There are some very specific plot points that they have to hit, to set things up for next week’s wrap-up of the 1795 storyline. This mostly involves moving characters from one place to another, which makes for good aerobic exercise but isn’t particularly interesting to watch.

The script is by Sam Hall today, the best of all Dark Shadows writers, and usually that means we get at least a couple jokes. But Hall’s heart isn’t in it today; all we get is functional dialogue, like “What’s happened?” and “You can’t!” Maybe he’s as bored with Vicki as I am, if that’s possible.

Vicki still has the gun, and she’s still doing what every actor does when they’re holding a gun, which is: point it at the person she’s looking at. So it’s basically Child Endangerment Theater today, full of strange scenes like this:

Daniel:  And the shutters of the fishing shack blew open, and he went to close them, and I ran out!

And she comforts him by giving him a hug, with the gun between them. She practically strokes his face with it.

So she basically just keeps him covered for the whole episode. I don’t know if you could broadcast a show today where the main character just casually points a loaded gun at a ten-year-old like this. When the Founding Fathers wrote the Second Amendment, I don’t think this is what they meant by a well ordered militia.

Daniel:  Miss Winters… what if I’ve gotten you caught?

Vicki:  No one’s going to be caught. Peter will be coming back in a few minutes, and he’ll bring food, and medicine, and a plan.

Yeah, great. I hope he brings some bandages, too, and a couple pints of blood, and a bunch of paper towels, and maybe a defense lawyer.

Daniel:  Where will you go?

Vicki:  I don’t know. Perhaps away in a boat.

Daniel:  No, not in a boat. Not tonight, not in this storm.

Oh, right — there’s a storm, by the way. We’ve been hearing thunder on and off. This must be one of those dry thunderstorms they have in Collinsport all the time, where they talk about the storm but nobody gets wet.

At Collinwood, Nathan comes downstairs and finds Noah waiting in the drawing room. He’s about as happy as anyone would be under the circumstances.

Noah:  Listen… it wasn’t my fault. 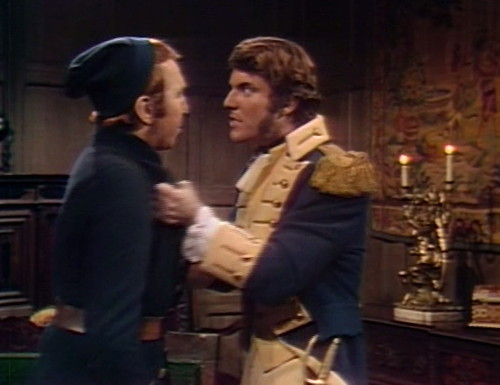 So you can hardly blame Nathan for getting annoyed. Nobody can be expected to put up with a guy standing around in the drawing room saying “the boy” all night.

Plus, Nathan’s got sudden-onset Bond villain syndrome, so the dialogue gets a little fraught. It’s all “You mean, you couldn’t catch him?” and “I ought to kill you!” Nathan used to be fun.

At one point, he even says, “You bungling fool!” because now apparently he’s Doctor Octopus.

Then Naomi comes in, to have a stern conversation that gets us exactly nowhere.

Naomi:  Daniel has been gone from this house for hours. How can you be so unconcerned?

Nathan:  Oh, Mrs. Collins, the boy is out playing.

Naomi:  At this hour? In this storm? The thunder and lightning would frighten him to death.

Nathan:  He had some pocket money with him, I’m sure. Perhaps he wandered into the village.

Sure, that makes sense. Or maybe he chartered a hot air balloon, or discovered a tribe of underground mole people who have elected him King. Almost anything could be happening out there. How about we go out and see?

I know, all I’m doing today is making snide remarks, but honestly, these runaround episodes don’t offer a lot of scope. An episode like this defies analysis; there’s nothing going on except what you see on the screen. 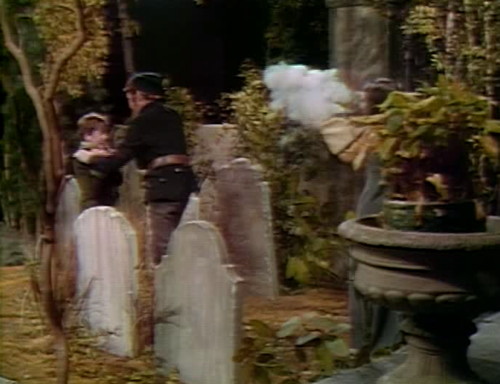 So let’s just fast-forward to the carnage. Daniel leaves the mausoleum, running right into the arms of his would-be kidnapper. Vicki follows, assesses the situation, and ka-CHOW! We’re down one speed bump. I guess this story had a happy ending after all.

The opening shot of Collinwood is in black and white.

Noah wasn’t wearing a hat at the end of yesterday’s episode. Today, the teaser repeats the scene of Noah following Daniel into the mausoleum, and this time, Noah has a hat on.

Sarah’s grave plaque isn’t on the wall in the mausoleum; it was there when Naomi and Joshua visited in episode 416.

There’s an offstage squeak while Nathan and Naomi are talking in the drawing room, just after Nathan raises the idea that Vicki could be holding Daniel hostage.

When Daniel notices that Vicki’s got a fever, he tells her, “You can’t stay in this house.” They’re in the mausoleum; it’s not a house.

The sound effect of the gunshot isn’t synched with Vicki firing the gun.