“I don’t believe any further explanation is necessary!”

Oh, great! More of this.

It’s been three weeks since we last saw time-traveling governess Victoria Winters, currently languishing in prison. Those were three good weeks. People seemed to laugh more, then. There were concerts in the park…

And now: Vicki and Peter. Pretty much nonstop for the next five episodes. 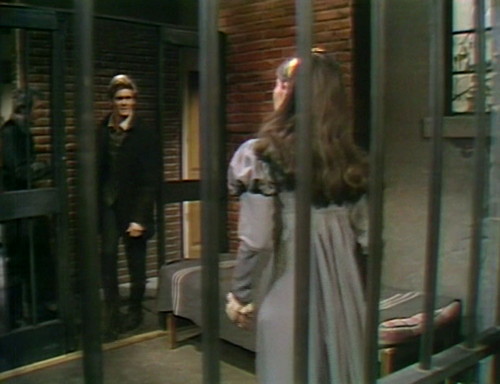 Vicki has recently been found guilty of witchcraft, and she’s sentenced to hang. This is entirely her own fault, and there’s no use pretending that it isn’t. She’s been saying and doing dumb things ever since she arrived in this century; it’s actually a surprise that she’s lasted this long.

Peter Bradford, her lawyer and boyfriend, has spent the last couple weeks trying to find Reverend Trask, the insane witch-hunting prosecutor. Trask has recently disappeared under mysterious circumstances, leaving behind a note that said that he’d totally changed his mind and decided that Vicki is innocent. This has not been the get-out-of-jail-free card that they hoped it might be. 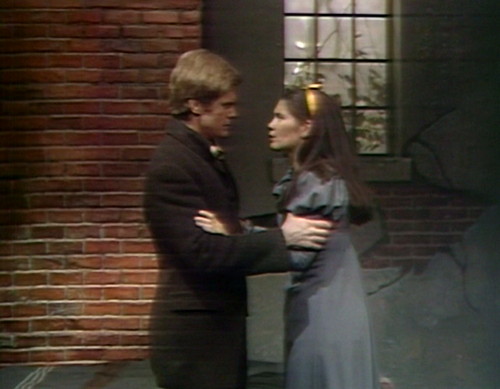 And blah blah blah, still in prison. I can’t even work up the energy for a sarcastic recap at this point. Vicki’s been in jail for more than two months, and honestly the only thing that’s changed is that now she and Peter touch each other all the time.

They get a visit from Joshua Collins — who you may remember from the recent episodes that didn’t make you want to hit somebody — and he’s got some startling news. He’s learned that Angelique was the real witch, and he’s determined to make things right with Vicki.

Joshua paces forward until he’s directly in center stage, facing the audience and completely blocking the other characters out of the shot, because who even are these people.

Joshua:  I was wrong about you. I’ve come to realize that you were innocent of the charges that were leveled against you.

Vicki:  But you were always so convinced that I was guilty!

Joshua:  I thought over Stokes’ testimony, and I decided he was telling the truth.

Peter:  You “thought it over”.

Joshua:  I don’t believe any further explanation is necessary! I’m here to help Miss Winters, if I can.

And oh my god, are you serious? This is why nobody likes you. Everything makes you angry. 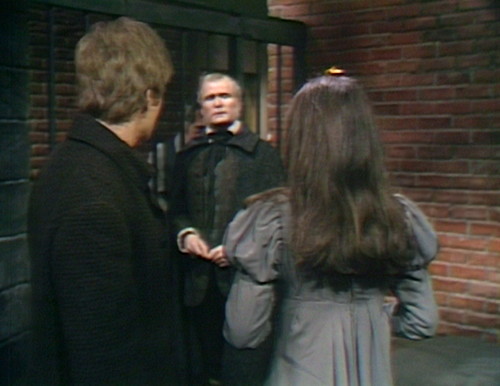 But Joshua doesn’t get rattled; he just moves to another part of the set where he can look noble and amazing, while the other actors have to turn their backs on the audience. And that’s why you don’t mess with theater people.

By the way, the bars on Vicki’s cell don’t go all the way up to the ceiling. She could have climbed out pretty much any time she wanted. I think she just got used to three hots and a cot. 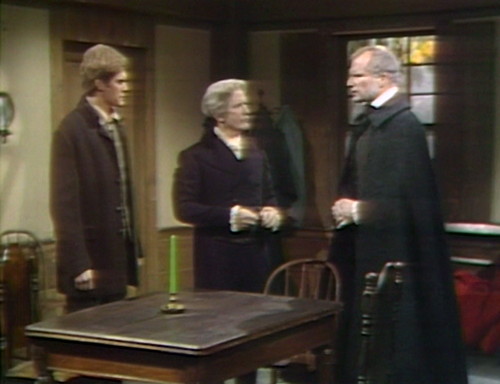 And, great. Now we’re talking to Judge Hanley. That ought to spice things up.

Honestly, I’m sorry that I’m being so negative today, but yesterday, we saw an old lady burn to death just standing there in the hallway. You don’t transition from that directly to a Judge Hanley scene. Any student of the dramatic arts could tell you that.

Anyway, the point of the scene is that Joshua wants the Judge to grant Vicki a stay of execution, and give her a new trial. The tricky thing is that Joshua can’t actually explain any of the new evidence that he has, without telling everybody that his son is a vampire. So it’s mostly hemming and hawing, with Joshua saying that he’s simply reflected and changed his mind.

This plot point gets us exactly nowhere.

Hanley:  Mrs. Collins said substantially the same thing in court. The court listened to her testimony, and considered it.

Joshua:  Well, surely my opinion will count for something.

Hanley:  Your opinion counts for a great deal. And if you had been willing to testify as a character witness for Miss Winters, you might have swayed the judgement of the jury. But now, unless you have something new to add to the evidence already presented, I’m afraid I can’t help you.

Now, that’s a weird thing to say, because there was no jury. We had a panel of three judges, a prosecutor, a defense attorney, the defendant, and maybe a witness or two. A jury is made up of twelve extras, and that costs money. It turns out that extras expect to get paid for appearing on screen; they don’t show up just for the sheer love of the craft.

And that’s been one of the big problems with this storyline. In drama, a courtroom scene isn’t supposed to be a few people standing around in a room arguing. We’ve got plenty of opportunities for that; we might as well stay in the drawing room.

The point of a trial sequence is to bring the characters’ conflicts out into the light, exposing them to public view. The courtroom is the place where the private sphere meets the public sphere, giving the whole community the chance to examine and judge.

The actual punishment isn’t the interesting part. If the writers want a character to die, or to suffer, they don’t need to walk us through a legal procedure, especially on this show. All they need to do is say “Bathia Mapes screams as she’s consumed by the flames,” and that’s the end of it.

So that’s why we don’t see a trial storyline like this for another couple years. After this sequence is over, the show goes back to where it belongs — the drawing rooms and hallways of the Collins estate, the cemeteries and basements and tower rooms. They don’t have the budget to mount a convincing version of a public square, and their heart’s not really in it anyway. Who needs lawyers and evidence, when you’ve got warlocks and black mass ceremonies?

So the big prison break, when it happens, is about as stripped-down as you can get. There’s only one day player working at the jail, and he’s dumb enough to turn his back on the prisoner’s boyfriend. Peter grabs his gun, tells him to get the keys, and now we’re breaking out of prison. 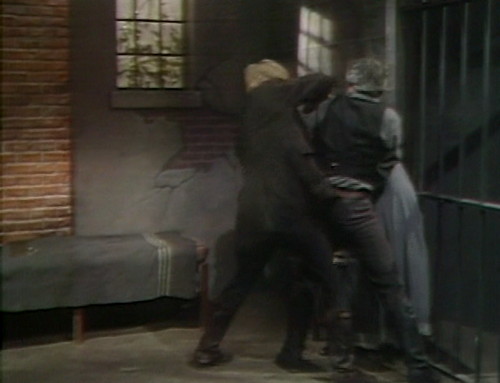 And it turns out these two can’t even get that right. In the cell, the jailer tries to fight back, and there’s a scuffle. In the confusion, somebody grabs the gun, and BANG! Vicki’s got a brand new shoulder wound. 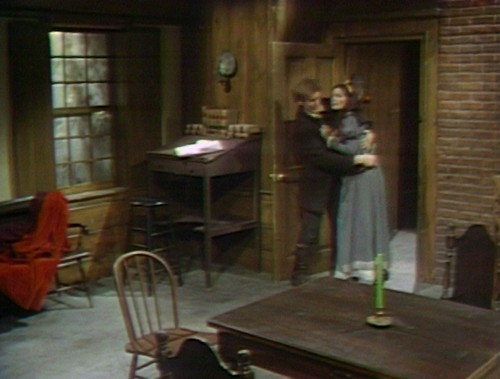 So, as our star-crossed jailbirds limp towards freedom, we hear a startled crowd just outside the door — they’ve heard the gunshot, and it doesn’t sound like they’re too happy about it. But it’s nothing to worry about; it’s just a sound effect. You kids go on ahead, we’ll catch up with you. If we’re running late, feel free to start without us.

As the show opens, Naomi is standing in the drawing room. There’s the sound of a door opening, and she turns and walks to the foyer. When she reaches the foyer, she stops suddenly — the front doors aren’t actually open; they just mis-timed the door sound effect. She stands there, looking slightly confused, until Joshua actually opens the door and walks in.

Near the beginning of Act 1, Joshua tells Naomi, “I didn’t lie to you, Millicent — Naomi. Perhaps you did see a light.”

One of the cameras has a color problem in Act 1. When Joshua sits down and says, “It isn’t easy to admit, but I’ve been wrong,” the picture is bright green. They cut away to another camera after about five seconds. They have the same problem at the end of the scene, when Naomi walks to the window. The picture looks normal at the start of the shot, but then turns green. Then they over-correct, and turn the picture a deep red for the fade-out.

Judge Hanley tells Joshua, “If you had been willing to testify as a character witness for Miss Collins — Miss Winters, you might have swayed the judgement of the jury.”

This one isn’t a blooper, it’s just odd — Joshua tells Naomi that the woman who exorcised the Old House was Bathia Mapes. This is the first time the dharacter’s name was spoken onscreen. Bathia never told Joshua or Natalie her name while we were watching, although obviously there was plenty of time between scenes when he could have inquired.