“I lose track of time. The days are all the same here, and no one ever bothers to tell me what day it is.”

He is dead, alas! Reverend Trask is dead. The world is a little duller now — noticeably quieter — and we’re down another antagonist, which poses a real problem. We’ve been shedding characters like crazy as we approach the end of the 1795 storyline, and here’s the point where the cast really starts to look thin.

As we’ve seen recently, Barnabas has taken on a new role as the monster who hunts other monsters, kind of a cross between Godzilla and Dexter. That story structure turns out to be very productive for the show over the next couple years, but in order to work, you need an opponent who’s in the same weight class.

Angelique and Reverend Trask were both Barnabas-sized problems, and it was satisfying to see him take them on. Now that they’re gone, the only villain left is Nathan, who’s more of a charming con man than a threatening monster.

But he’s the best that we have to work with, so over the next week, we need to turn Nathan the adorable rascal into Nathan the predator. 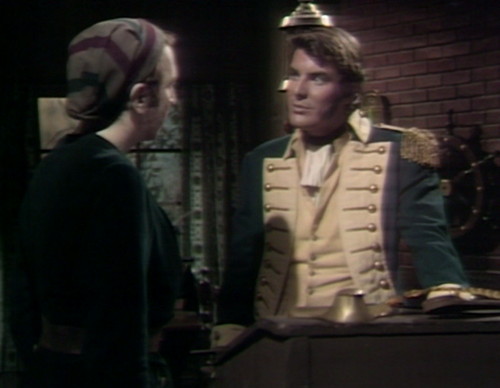 You can always tell when a soap opera is running dry on characters, because they start drafting day players into service as talk-to’s. This is common practice on soaps. You pick somebody out of the background, give them a name — Chad, let’s say, or Schuyler — and then give them a list of questions to ask, like “How did you find out?” or “When do the test results come back?”

In this case, his name is Noah, and he’s apparently a sailor and a petty thief. Nathan is a Lieutenant in the Navy, and Noah dresses like a chorus member from The Pirates of Penzance, so I’m not quite sure how they hooked up. 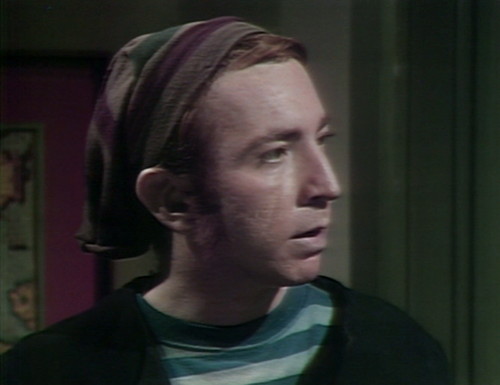 But Nathan’s recent playmate just became architecture, so here’s Noah. Drink him in, folks. He doesn’t seem to like Nathan much, which doesn’t earn him any points with the viewers. He keeps asking for money, and saying things like “I just don’t know how you talked me into this,” and “What kind of excitement?” This isn’t real dialogue; it’s Dialogue Helper. 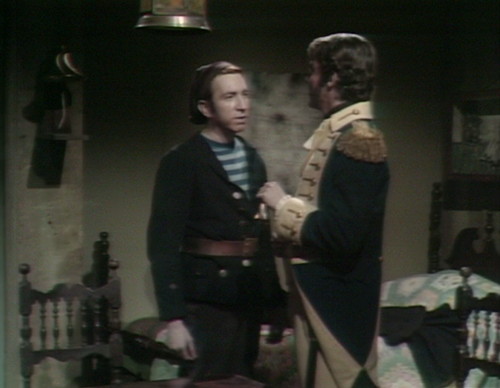 On the up side, he gives Nathan all the softball pitches that he needs to explain his plan to lure the wealthy Millicent Collins back to his side. Nathan recently found Barnabas’ cane on the docks just after a woman was attacked, and he’s got a scheme to turn that baffling situation to his advantage.

As Nathan lays out the schedule, Noah asks questions like “All right, what do I have to do?” and “What about later?” which is pretty much all you can expect from someone in his pay grade.

Over at Collinwood, we’ve got another random talk-to — an unnamed maid, who we’ve never seen before and we’ll never see again. As is traditional among soap opera domestics, her role is to stand there and look perplexed while the rich lady acts crazy, and maybe throw in a question like “Are you all right?” if the scene needs a little push.

Anyway, this is the beginning of Nathan’s plan — he writes a note on a fan, and then has Noah deliver the fan to Millicent. This is what people used to do before text messaging was invented. They called it fan mail.

Millicent is angry at Nathan for various bigamy-related deceptions, and she’s been waiting for her cousin Barnabas to come back from England, so he can defend her honor by challenging Nathan to a duel. She thinks that getting a message written on a fan is a thing that happens, which shows you how far she’s drifted from normal lately. 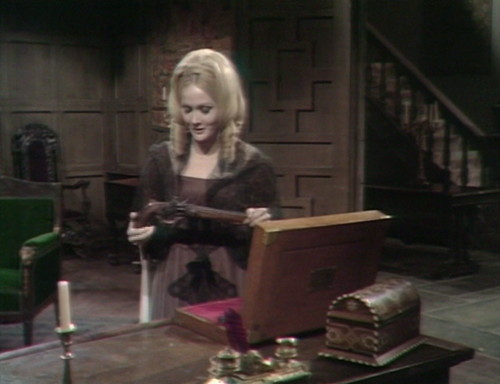 Things are starting to drag a bit, so Millicent goes rooting around in the drawing room for the box of duelling pistols. This is one of the great things about Collinwood; murder weapons are just strewn about the house, in easy reach of anyone who decides to do something crazy.

As always, actors have no idea what to do with a gun. Millicent just picks one up and fondles it. She says it’s not loaded, but in this house, that’s not a safe assumption.

And then we have a scene with Natalie, who’s hanging around Collinwood for no particular reason. Her brother Andre is gone — off to New York on business, last time anyone mentioned him — and her niece Josette is dead. But Millicent needs somebody to talk to about the fan and the guns, so Natalie’s still here.

Luckily, Grayson Hall and Nancy Barrett are always fun to watch, so this isn’t a bad scene. Natalie is gently talking the crazy girl into putting down the box of firearms, which is a worthwhile thing to do. But really, this whole episode is just plot mechanics, so it’s hard for me to get excited about anything.

And here’s another example, walking in the door. It’s Peter, Vicki’s lawyer-slash-boyfriend, and he’s still trying to prove that she’s innocent of the witchcraft charges. All the B-plots are just ping-ponging around today.

Peter’s got the note that Trask was forced to write yesterday, clearing Vicki’s name, but the authorities won’t listen to him. There’s really no particular reason for him to come to Collinwood and talk to Natalie about it, but apparently we’re holding a meeting of the Leftover Characters Club in the Collinwood foyer. 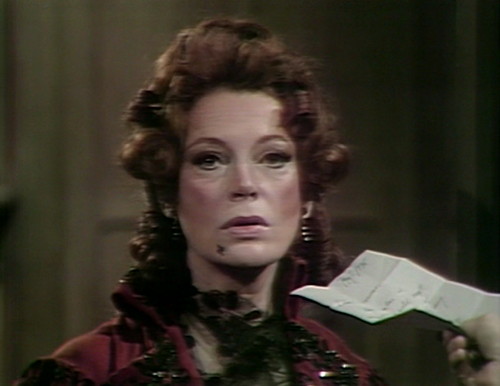 We pause on Natalie’s face for an act break, while Peter holds the note about a centimeter away from her face, because Peter is a jerk.

You may have noticed that there are a lot of props today — the cane, the guns — and this is the second note that’s arrived in the last ten minutes. It’s like they knew they didn’t have a lot of story today, so everybody decided to catch up on their paperwork.

Then we get a whole scene of Peter scowling, and trying to get Natalie to consider the idea that maybe Angelique was the real witch in the house. Vicki’s trial ended last week, but this is apparently The Plot Point That Will Not Die, and now Peter is passionately rehashing the trial scenes with a character who really doesn’t have a lot to do with anything. 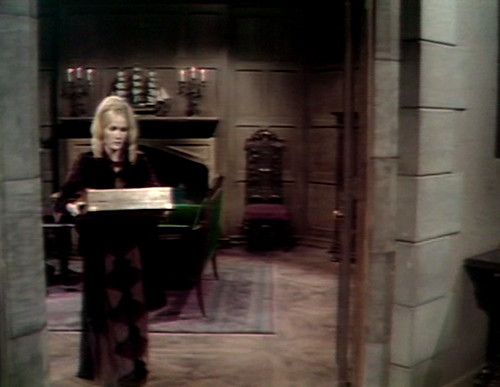 Once Peter and Natalie clear the room, Millicent sneaks back into the drawing room to get the guns, so it turns out her conversation with Natalie was nothing but time-filling. This episode is mostly about transporting props from one room to another.

Outside in the garden, Nathan is doing caper prep with Noah. I really want to like this scene, because it involves disguises and trickery, and that’s usually a good sign. But Noah is asking more whiny questions like “Why do I have to wear this?”, which means that he still doesn’t understand the plan that Nathan has been trying to explain to him for the entire episode.

So, I don’t know, maybe it turns out that there isn’t an episode 443 after all. Everything that’s happening today is just moving pieces around the board, putting things in place to set up interesting stories next week. I wish I could say that things are going to improve over the next couple of days. I wish I could say a lot of things.

Tomorrow: Anatomy of a Speed Bump.

Peter trips over a line in his conversation with Natalie: “You could help us by telling us… by telling us about Angelique.”

The Collinwood maid is played by Charlotte Fairchild, a stage actress who was an understudy on several well-known Broadway musicals, including the original productions of Damn Yankees, Mame and 42nd Street. Her only other TV credit is for a 1967 episode of the anthology show NBC Experiment in Television, and she also had a role in a 1972 horror movie, Silent Night, Bloody Night. This is her only appearance on Dark Shadows.

Tomorrow: Anatomy of a Speed Bump. 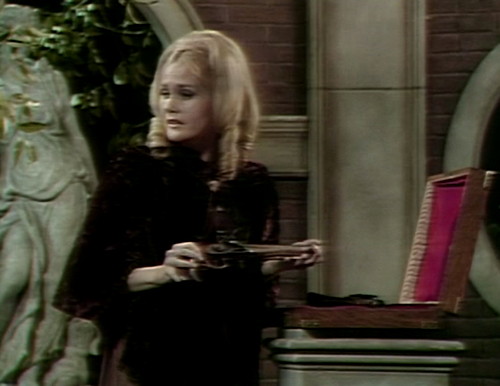