“I believe a lot of things, but that doesn’t prevent me from being amused by them.”

On Friday, Barnabas’ pleasant costume party was interrupted by several strange incidents — Liz felt a piercing cold, the door flew open, and a bunch of candles blew out. For some reason, everybody decided that a ghost was trying to communicate with them, rather than the obvious alternative explanation, namely: it’s windy outside and we’re in a drafty old house.

So now they’re all sitting around a table with their fingers touching, conducting an impromptu seance. Just as they’re ready to give up, Vicki starts to moan: “Run… please, faster… I must run. Don’t stop me! Don’t STOP me!”

Vicki’s eyes are closed, and she’s gone into a trance.

Vicki:  Faster… I can feel the stones beneath my feet. They hurt me. Why am I so cold? The rain, it stings my face!

Carolyn:  Can you tell us who you are?

Vicki:  I have nowhere to go! Nowhere! He’s getting closer!

Carolyn:  Who is chasing you?

And, holy cow, is there anything you don’t have a problem with right now? You don’t like the stones, the rain, your dress… Honestly, we’ve gone to the trouble of piercing the veil between the living and the dead, and all you can do is complain. 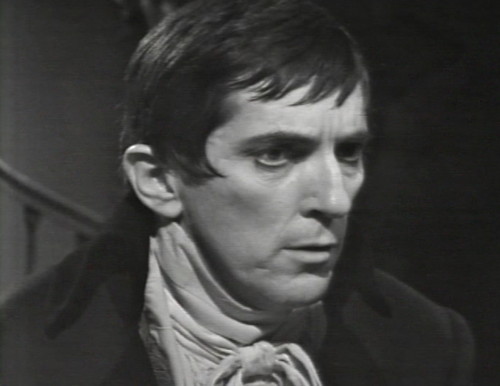 Barnabas is horrified, because he knows what’s going on. This is Josette, the girl that he loved, who died when she jumped off the cliff on Widows’ Hill. She’s re-enacting the night of her death, and Barnabas is the guy chasing her.

So it’s a tough moment. The writers have been working overtime lately to turn Barnabas into a heartbroken romantic, and he’s never been more sympathetic than he is right now.

After all, he’s organized this whole party so he can get closer to the girl he has a crush on. After four sips of claret cup, she gets woozy and passes out, and then his ex-girlfriend shows up and and tells everybody what a jerk he is.

I think we’ve all had nights like that, haven’t we?

Vicki’s improv routine goes on and on, until finally, she’s at the edge of the cliff, shouting, “Stay away from me! Please stay away!”

Barnabas breaks contact with the circle, stands up and yells, “NO!”

Vicki screams, and faceplants on the table.

Everyone else is startled, and confused.

Barnabas:  I couldn’t let her go on. If that was Josette… she was recreating her death.

Carolyn:  But she was about to tell us the name of the person who was chasing her.

Barnabas:  I couldn’t let her go through that death again…

Roger:  You shouldn’t have stopped her.

Barnabas:  It was the only way I could save her!

Barnabas really is in distress; he’s completely off guard, and not in control of the situation. It’s a nice character moment, continuing to position Barnabas as a tragic lover rather than a monster.

However: everything that we know so far about his relationship with Josette paints a darker picture than he’d like to believe. We know that Josette was married to Jeremiah, and on Friday, Carolyn said that she’s heard they were very much in love. (Barnabas shouted, “That’s not true!” and then had to apologize for his passionate crazy-person outburst.)

We also know that Josette was running away from Barnabas when she jumped off the cliff, and Josette’s appearance at the seance implies that she’s trying to warn Vicki about him.

So given that evidence — along with what we’ve seen him do to Maggie — the most likely interpretation is that Josette loved her husband, and Barnabas was a jealous stalker. Nothing that we’ve seen or heard indicates that they actually had a relationship.

Eventually, Barnabas’ backstory will be comprehensively retconned, and they’ll establish that Barnabas and Josette were engaged before she met Jeremiah. But for now, the clues that we have point to this not being one of the world’s great romances.

Okay, moving on. Vicki recovers from the seance, and says she needs to get some fresh air. On her way to the door, she looks upstairs…

… And there’s Sarah! The little ghost stares down at Vicki, and then walks away into the shadows.

Vicki calls to the little girl, but by the time the others get to the stairs, Sarah is gone.

Barnabas is pretty upset by this, and no wonder — that makes two uninvited spirits crashing his party. Can’t a guy have a seance in a haunted house without all these interruptions?

The party breaks up, and the family goes back to Collinwood, where Roger has a drink and says funny things.

Vicki:  I wish the party hadn’t ended so soon.

Liz:  I should think you’d be happy that it’s all over.

Roger:  Well, of course you aren’t; you had more fun than anybody.

Liz:  How can you call it fun?

Roger:  Because it was! Oh, Liz, you surprise me. You take it so seriously!

Carolyn:  You took the seance seriously.

Yes, it’s Roger to the rescue again, perking up what would otherwise be a gloomy recap of the scene we just saw. Roger is the audience stand-in right now — he was the one who insisted on holding the seance in the last episode, and he wants to see more things happen.

He’s not acting, by the way. This is what I was talking about on Friday, that soap opera characters tend to drift over time to become more like the actor. From what I’ve read about Louis Edmonds, the actor who plays Roger, this is pretty much what he was like — a wry, witty theater queen.

When the show started, Roger was an angry, haunted man with terrible secrets. It’s only been a year, and look at what he’s become.

Roger:  And now to bed, and dreams of lovely ladies jumping off cliffs and all sorts of ancestral exercises.

Roger:  Oh, nonsense, Liz. What is the value of suffering if it isn’t to be enjoyed?

Liz:  Enjoy your own then, not other people’s.

Roger:  I think that all of the unhappiness of all of my ancestors is my rightful heritage, and you shouldn’t try to keep it from me. Good night, ladies. 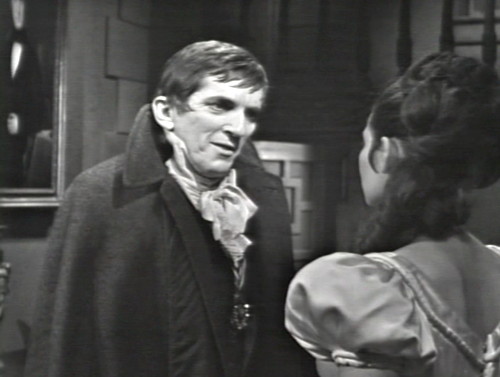 Everybody goes to bed except for Vicki, who stands around in the drawing room and stares into space. Then Barnabas comes over, hoping to get another chance to talk to her. The seance was kind of an intense “lose my number” message from Josette, so he’s anxious to make progress with the new girl.

So what time is it right now? In the party scene on Friday, Roger mentioned that it was 11:00 pm. Then they had the whole seance, and the recovery, and then leaving the Old House and walking back to Collinwood. It’s got to be at least 1 am.

But they tend to stay up pretty late at Collinwood, and I guess they’ll need to, if their new main character is out of commission during the daylight hours.

Barnabas thanks Vicki for coming, and apologizes for being upset about the seance.

Barnabas:  In spite of everything, I must confess that I don’t believe in ghosts.

No, not really. Is it possible that you got a concussion when your head hit the table?

Barnabas gives her a gift — Josette’s music box — and she’s thrilled. She admires it, he stares at her and makes super creepy vampire faces, and that’s the end of the episode.

So, at press time, the score is: one vampire and two ghosts. Who else could they possibly throw into this mix that would make things even more crazy and unpredictable? Tune in tomorrow to find out.

When Vicki goes into the trance, she calls out perfectly clearly, “I must run!” You can tell that she was supposed to mumble that line, because Carolyn asks, “What did she say?” and Roger says, “Something about ‘run’.”

Vicki asks Barnabas, “Do you remember that dress, that little girl’s dress, that we found in the trunk with the other old clothes?” She’s referring to episode 278, but she’s not the one who found the dress. Willie found it, after Vicki had left.

Liz stumbles over Barnabas’ name when she’s talking to Roger: “How can you say that? Even Barnas — Barnabas was upset by what happened.”

Liz also loses track of her lines as she’s leaving the drawing room. She says, “I’ll give him our apologies tomorrow,” and then there’s an awkward pause before she says, “And… I think we should all get to bed.”