Comforting thoughts, courtesy of Dark Shadows: Any time you think you’re having a run of bad luck, think of Elizabeth at this moment. She’s being blackmailed into marrying a man that she despises, and the only way out is to throw herself off the cliff at the top of Widows’ Hill. And who shows up to talk her down off the ledge? Her screeching, judgemental, charm-free governess, Victoria Winters.

But I’m sure it’ll work out, because there’s no sense of real threat here. I don’t care how many times Liz walks up to the edge; there’s not a single person in the audience who honestly believes that she’s going to jump. Even if you don’t watch a lot of soap operas, anybody can spot this as a narrative dead end. It’s just not going to happen.

So, for me, the real question is: Why do I love this show so much, when I can’t stand the main character?

Liz:  I have to go through with it.

Vicki:  No, Mrs. Stoddard! You haven’t betrayed anyone!

Liz:  I haven’t the strength to fight anymore.

Vicki delivers this cover version of the Monty Python argument clinic sketch in a panicked squeal, at the top of her lungs, about a centimeter away from Liz’s left ear.

And the thing that’s really unfair is that a soap opera isn’t even supposed to have a main character. Dark Shadows was actually kind of a throwback in that regard.

In the 1930s and 40s, there were a lot of radio soap operas that told the serialized story of a single main character, including The Romance of Helen Trent, The Career of Alice Blair, Mary Noble Backstage Wife, and Young Widder Brown. (By the way, don’t all of those sound amazing? There are so many great ones that I could keep going forever. One more: Kay Fairchild, Stepmother. Okay, I’m done.)

But by the time soaps moved to television in the 1950s, they’d figured out that it’s hard to keep a never-ending narrative engine going when you’ve only got one main character. At some point, either Helen Trent is going to get married or she’s just not, and you don’t want to hear about it anymore. So they started making soap operas that were about a small town, or a hospital, or a pair of competing newspapers.

So Dark Shadows was kind of deliberately outdated for beginning every episode with the words “My name is Victoria Winters.” The original concept for the show was basically “Let’s do Jane Eyre as a soap opera,” so obviously you put Jane front and center.

There were two basic problems with this approach:

#1. You can’t actually turn a closed-narrative story into an open-narrative story without running out of plot, so eventually you have to start throwing in Dracula and The Portrait of Dorian Gray.

#2. Jane Eyre is feisty and awesome, and Victoria Winters is a mopey wet blanket with exactly zero redeeming features.

Okay, back to the cliff.

Liz:  You forget — I killed my husband. I deserve to be punished for that!

Vicki:  You’ve sat in judgement for yourself for much too long. You’ve sentenced yourself — you’ve imprisoned yourself! And now you want to be your own executioner. Tell the others about your husband and let them judge you! I know that they won’t be as hard on you as you’ve been on yourself.

Which is an interesting perspective, considering that murder is against the law and you can’t just place yourself under voluntary house arrest.

But that kind of logic makes sense to Vicki, because what she’s really saying is that Liz is a Good Person, and Jason is a Bad Person. Everyone will automatically forgive Liz for killing her husband because they know that deep down she didn’t really mean to, and she’s already locked herself up in the house for eighteen years anyway.

Oh, and that reminds me — she’s wearing another new coat! I noticed a couple weeks ago that she wore a dark coat in episode 233 and then a light coat in episode 259, and here she is again, with a third coat.

I know she’s wealthy, but that’s still a lot of wardrobe options for a woman who literally didn’t leave the house for eighteen years. I’m just saying. 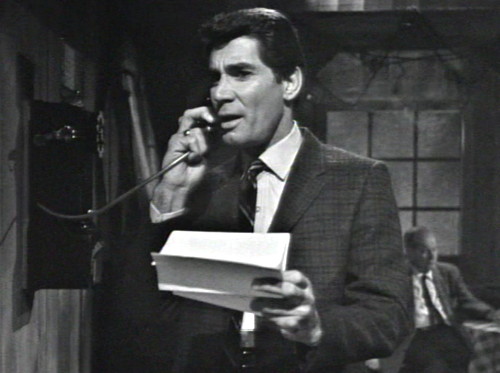 Anyway, it turns out that Liz doesn’t jump — big surprise, another victory for sensible outerwear — so let’s check in at the Blue Whale, where New Burke is conducting secret investigations into Jason McGuire’s past.

Burke’s just received information from a private investigator about Jason’s outstanding warrants, and he wants to keep digging for more. Why he’s conducting these clandestine investigations over a pay phone in a crowded bar is anyone’s guess.

Vicki shows up, and Burke shows her what he’s found.

Burke:  I have reports here from Hong Kong, Rio, Marseilles, you name it.

He flips through the pages as he’s saying this, as if each charge is written on a separate piece of paper. 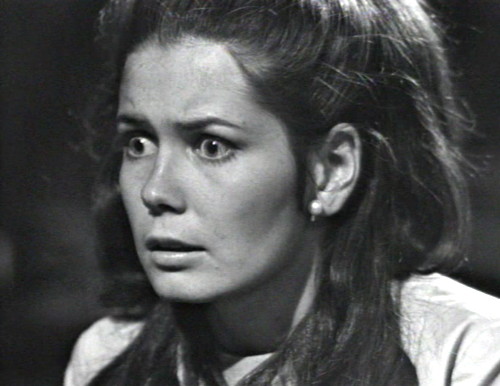 As always, Vicki’s razor-sharp mind gets right to the heart of the problem.

Burke:  But they’ve never had enough proof to prosecute.

Vicki:  With a reputation like that, why wasn’t he at least detained?

The answer to her question, obviously, is: BECAUSE THAT’S NOT HOW THE LAW WORKS. You can’t just go around detaining people because they have a reputation.

This is another example of Vicki’s underdeveloped moral sensibility. In her world, Jason is a Bad Person, and therefore somebody in Marseilles should have taken care of the situation.

Vicki and Burke get all pumped up about this, and they decide to go to Collinwood and confront Liz with the information.

Surely, the theory goes, if she was told What Kind of a Man Jason Really Is, she wouldn’t go through with the wedding.

And then the most wonderful thing happens.

Jason walks into the middle of this conversation, and demands to see the evidence. Burke hands over the papers…

… And you can see that the word EXTORTION is written on the last page in black magic marker. That’s why Burke flipped through the pages and read off “smuggling, swindling, extortion.” Each page has the name of the crime written in big block letters.

And what can you do when a thing like that happens on the television show that you’re watching? It’s one of those moments that goes beyond the level of “blooper”. Two different actors handled that prop — they did a dress rehearsal — and nobody thought it looked silly? That is a premeditated act of self-sabotage.

And it’s beautiful. It’s so bad, and so stupid, that it travels all the way around to being amazing. And I fall in love with this show all over again.

Over the next month or so, two competing theories of morality are going to battle it out for the soul of Dark Shadows.

As we’ve seen today, Vicki and Burke represent the idea that there are Good People, who have the authority and the responsibility to sit in judgement over the Bad People.

And then there are the monsters — Barnabas, Julia and Willie — who represent the opposing view, which is that everybody is a mixture of good and bad, and that’s what makes the world complicated and interesting.

Happily, the monsters are going to win, which means we get dramatic situations and likeable characters. This is practically the last moment on the show when Vicki and Burke get to be perfect and virtuous and smug, facing off against black-hat Jason.

Someone in the studio coughs when Vicki enters Liz’s bedroom in the first scene.

When they’re sitting in the drawing room, Liz asks Vicki not to tell anyone about her plans. Vicki says that she won’t, and Liz thanks her. Then the two of them both start to say “Will you –” at exactly the same time. It’s adorable. 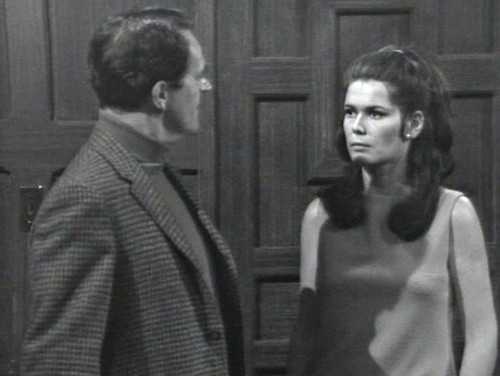