“You always choose the worst things to want.”

Maggie is in her basement cell looking bored, and no wonder; she’s gotten used to a pretty hectic lifestyle. She spent a couple weeks walking up and down the Old House stairs wearing a wedding dress, which sounds boring but at least it’s aerobic exercise. Now she has nothing to do but stare off into space and wait for spectral visitations. 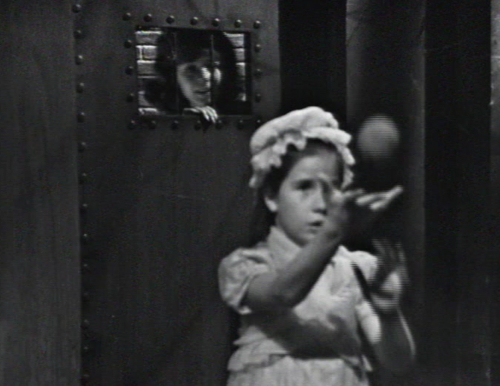 Maggie looks through the window, and she sees the little girl playing with a ball and singing “London Bridge”. It’s a weird thing to feature on your television show, but this is what they have, and they’re committing to it.

Maggie calls to the girl, and she has lots of questions, including: What are you doing here? How did you get in? and Why are you here?

The girl just keeps on singing and catching her ball.

Also: please stop singing, because it’s only been two minutes and already it’s driving the audience out of their ever-loving minds.

It doesn’t seem to occur to Maggie that this might be a hallucination, but like I said, it’s been a weird couple of weeks.

Suddenly, the girl stops singing and just stares at the camera for a minute, which is its own kind of eerie.

She tells the girl to go home, and tell her parents that she saw Maggie Evans here. Without a word, the girl turns and slowly walks away.

Maggie cheers, “That’s it! Hurry! Hurry before they catch you!” Yeah, look at her go. Zoom.

A moment later, Willie approaches the cell to bring Maggie some food. Apparently he didn’t notice the girl walking down the corridor, so maybe she was faster than she looked.

Maggie begs Willie to help her escape. Willie gets a big close-up, staring into the middle distance for a monologue:

Willie:  You know I can’t escape. Don’t you think I wanted to, tried to? I go out of this house almost every day, drive into town. Don’t you think that while I’m there, I get the impulse to step on the gas and never stop driving until I’m a thousand miles away? I even tried a few times. But he’s got this power. My will isn’t my own; I keep seein’ him, hearin’ him! He’s done something to my mind.

It’s a great speech, and you can tell that he’s been practicing for it all week. This is his big Stanley Kowalski moment.

Meanwhile, over at Collinwood, Vicki and David are finishing up a spirited lesson.

Vicki:  What is Australia best known for?

Is it? As far as I know, that’s exactly what Australia is best known for. What answer is she fishing for, polar bears? 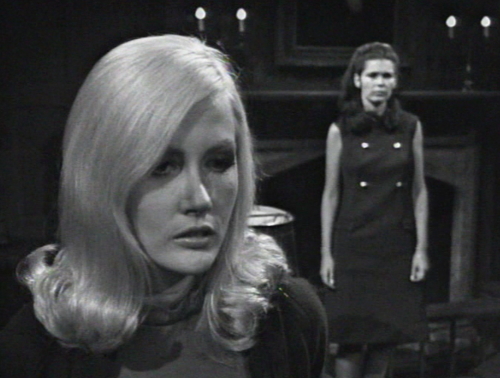 Carolyn enters, and David goes outside to play so the two girls can stand around and have an argument.

Carolyn is all smiles; she says that she’s been making plans.

Vicki frowns and says, “I hope your plans don’t include what’s been going on lately,” which is a difficult kind of hope to get your mind around.

Then we get another close-order drill backacting display. Carolyn does a long sarcastic monologue about her mother’s romantic history, while Vicki stares at the back of her head.

Then Carolyn moves to the door, pauses, and then keeps talking, still not looking at Vicki. This is a full 50 seconds of backacting, which isn’t a world record but is still very impressive.

By the way, just to confim: Talking about Carolyn’s beatnik boyfriend is not as much fun if Buzz isn’t there in person. Later in the episode, we’ll hear his motorcycle revving outside, but he doesn’t make an appearance onscreen, which in my opinion is a waste of a good beatnik. 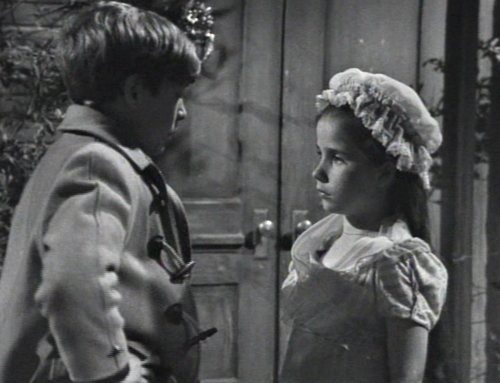 Outside, David wanders over to the Old House, obviously, and he meets the strange little girl from the basement. She tells him that her name is Sarah, and they play catch together.

She starts singing “London Bridge”, and she hardly gets through a verse before David sneers that it’s a baby song.

He imitates her: “London Bridge is falling down — can’t you do anything else?”

David’s being pretty judgemental, considering that this is the first child he’s ever interacted with in his entire life.

She tells him a bit about how lonely she is — everyone she knows has gone away, and she can’t find them. Then she asks, “Will you play with me again?”

David shrugs, “I suppose so. If I’m around.”

Dang — kid, get a grip. This girl has the two qualities you should be looking for in a friend. #1: She’s played with you. #2: She wants to play with you again. Stop acting like a player! 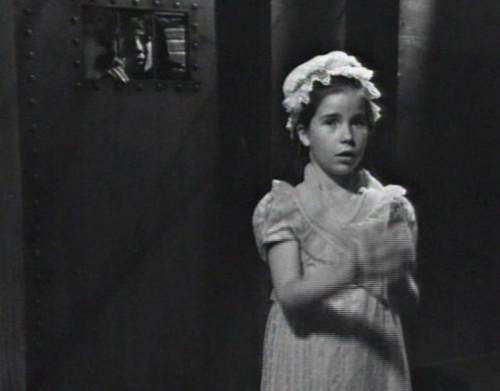 Okay, back to the basement, where Maggie hears the girl singing outside her cell again.

Sarah’s trying to keep her eye on the ball, but she keeps peeking offstage, probably looking for the director to give her a cue.

Sarah was played by nine-year-old Sharon Smyth, and this was her second soap opera role. Sharon stopped acting after Dark Shadows, or possibly during.

Maggie calls to the girl again. Sarah turns to face her, and says, “If you see my big brother, don’t tell him you saw me! He doesn’t like anybody to come down here.”

And then she skips away.

There’s a film insert halfway through the episode, showing David on a swing, with the Old House behind him. When they cut to David swinging in the studio, the swing is facing the Old House.

Somebody has drawn on one of the boxes in Maggie’s cell with a magic marker; it’s a series of concentric circles that look like an eye. This wouldn’t be a big deal, but that box is at the very front of the set, and Maggie sits right next to it several times during the episode. 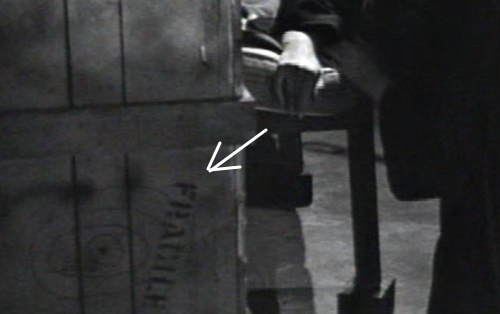