“That guy looks like about as much fun as a bag full of spiders.”

Carolyn’s been acting out this week, punishing her mother for getting engaged to Jason.

But Carolyn’s rebellion is PG-rated at best, especially for 1967. The sum total of her transgressions are that she’s dating a guy who wears a black leather jacket, and they go for motorcycle rides. Buzz only drinks beer, and he doesn’t even like it very much. There’s no sex, no drugs, and only the loosest association to rock ‘n roll. 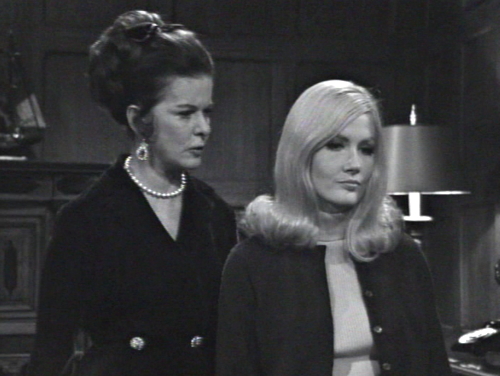 So, as far as the young people are concerned, Dark Shadows is not exactly in tune with the times.

This episode aired on June 15, 1967 — the day before the Monterey Pop Festival, when Pete Townshend and Jimi Hendrix smashed their guitars, and the Summer of Love began.

But the Dark Shadows production team is not particularly in touch. Executive producer Dan Curtis, writers Ron Sproat and Malcolm Marmorstein — these are guys in their late 30s, and they’re in New York, working on daytime television. This may be the summer of Sergeant Pepper and Are You Experienced, but that does not apply in Collinsport. 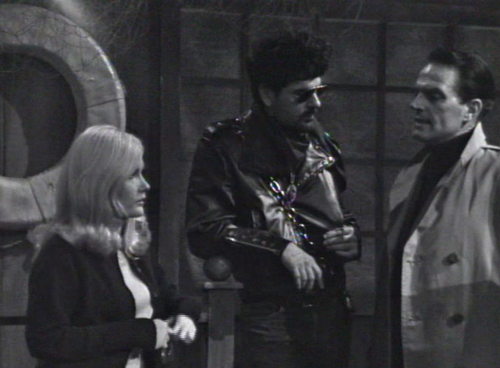 So the show’s depiction of a teenage rebel is about ten years out of date. Here’s some sample dialogue from Buzz as the young couple walks into the Blue Whale, the hot nightspot for middle-aged fishermen:

Why come to this sewer when I know a lot of treetops we could swing on?

Save it, baby! Blow it all now, and there’s nothing left for nobody else.

And then he sits down backwards on a chair, and drums on the table like he’s playing bongos.

In the movies, the core text on the subject is the 1959 film The Beat Generation, which popularized the association between violent crime and “the weird, way-out world of the beatniks”. So it doesn’t matter that Carolyn and Buzz are clearly having a pleasant, relaxing evening in a well-lit bar. Buzz wears a leather jacket, and therefore: toxic.

Also, it doesn’t help that he has a goatee; on Dark Shadows, facial hair is inextricably linked to moral failure.

Nicholas Blair, Count Petofi, Joshua Collins — all of the most diabolical characters have mustaches and beards. Quentin Collins slowly trims back his muttonchops as he matures from heartless rogue to romantic hero. In 1970, in a Dr. Jekyll and Mr. Hyde-inspired storyline, the good Dr. Cyrus Longworth is clean-shaven, and the evil alter ego John Yaegar has a huge black mustache.

So Buzz is just doomed from the start, because he has a goatee. It’s tragic, really.

But what else is Carolyn supposed to do? The only guys on the show in the appropriate age range are Burke and Joe. They’re both taken, and this week, they’ve merged into a composite Joe/Burke collective of disapproval.

So who’s Carolyn supposed to date, the president of the Awkward Dance Society behind her? 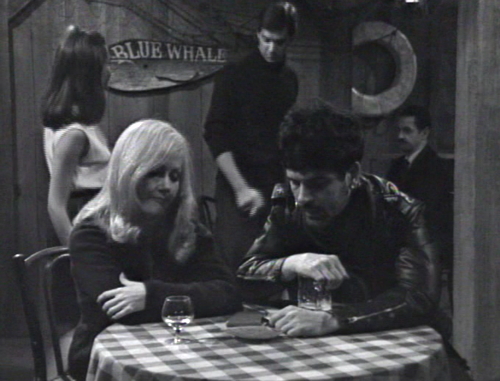 I mean, seriously. Look at these clowns.

They’re concentrating really hard on their background dancing; they’re giving 110 percent. And this is the best they can do. Carolyn has clearly picked the best out of a very limited sample.

So when they get back to Collinwood, Carolyn hits upon the most 1950s rebellion possible — she’s going to marry Buzz!

Sweetheart, this is June 1967. You’re supposed to be dropping acid and sleeping with as many members of The Who as you can. Revenge weddings are no longer fashionable. 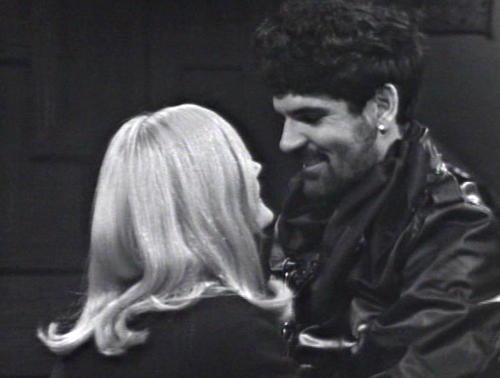 We’ll get to some psychedelia eventually, but for the first year and a half of the show, the 60s is decisively something that happens to other people. In the summer before the Summer of Love, the Collins family walked into a dark mansion on a rainswept cliffside in Maine, shut the door firmly, and stopped looking outside.

And from everything I’ve read about the show, it sounds like the desperately overworked Dark Shadows cast and crew did the same.

When the show suddenly turned into a hit over the summer of 1967, groups of teenagers would congregate outside the studio every afternoon. There are dozens of snapshots of cast members emerging through the door at the end of the day, blinking and disheveled, and greeting the waiting fans with a kind of dazed wonder, as if they’d forgotten that the race of men still dwelled on the earth’s surface.

Outside the door of ABC Studio 16, the world was growing brighter and louder, but the residents of Collinsport never noticed. There is no summer for them. If you’re planning to perpetrate a half-hour episode of Dark Shadows in cold blood, then it can only be done in darkness.

Tomorrow: Job Interview with the Vampire.

Jason prompts Liz: “Come on, Liz, tell them you believe me. Tell them you agree with me.”

Tomorrow: Job Interview with the Vampire.