“Well, I’ve got some news for you. Either your mother has taken leave of her senses, or I have.”

Well, we should’ve seen it coming. On Friday, we had too much fun with the vampire, switching blood slides and generally getting up to mischief, so today we’re back in detention with Liz and Jason. 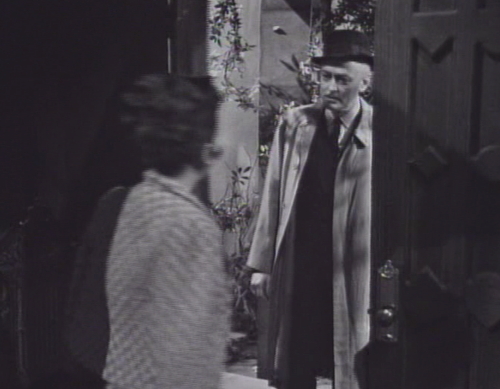 This is the blackmail storyline, so we’ve got all the time in the world for a nice big chunk of door acting. Liz is pacing in the drawing room, there’s a knock at the door, and she walks all the way across the set to open it. It’s Richard Garner, exactly who she was expecting, and there’s some business with his hat and coat.

Carolyn watches Liz and Richard walk into the drawing room, and then Vicki has to enter through another door before anybody can actually talk to each other.

All in all, I make it 75 seconds before the first character says a single line of non-door-related dialogue. I don’t know if that’s a record, but it’s certainly the time to beat.

So here’s the bad news: Richard Garner is Liz’s lawyer, and he’s here to explain to us how divorce works.

The good news: This is his last appearance, and we’ll never see another boring lawyer, banker or cannery union representative for the rest of the series. The next new character they introduce is a make-believe comedy beatnik. After that, there’s a ghost, and a mad scientist, and then we’re off to the races.

Liz tells Garner that she wants to get a divorce. Her husband Paul “disappeared” 18 years ago, and the lawyer’s been urging Liz to divorce him for years.

He says that the divorce will be easy, given Paul’s desertion; they ought to be able to do it in 90 days, perhaps sooner. And it had better be a lot sooner, because I personally have zero interest in watching people sit around and talk about it for another three months.

Liz tells her brother Roger about the divorce, and he’s thrilled; he uses the word “delighted” three times. Everybody in today’s episode acts like this is the best news they’ve heard in years.

He puts his arm around her, and says, “Well, we didn’t have much luck with marriage, did we? Either one of us. Perhaps we’re people who were never meant to be married.”

And that’s one reason why there are so many gay Dark Shadows fans.

For the most part, soap operas are a long series of heterosexual love stories, punctuated by the occasional murder. Dark Shadows has its share of romance and passion, especially once we get into Barnabas’ backstory, but the romance is usually either tragic or unrequited. There’s a lot of longing for people that you love desperately, but you can’t have.

In fact, there’s only one happily married couple in the entire series, and it’s Sandor and Magda, two traveling gypsies and con artists that we meet in 1969.

Have you noticed that I’m mentioning a lot of future storylines today? That’s because the alternative is actually writing about this episode, which is impossible.

So let’s move along. Liz tells Roger that she’s considering marrying again. Roger, Carolyn and Vicki confer in the library, and they decide that Jason must have some hold over Liz.

Carolyn finally remembers that she was trying to get into That Room in the Basement a few weeks ago, and now she’s determined to get down there and see what the big secret is all about. Liz refuses to give Carolyn the key, and that pretty much wraps it up.

And now, the really good news: we will be going down into the basement tomorrow, but not the Collinwood basement. Instead, we’ll visit the Old House basement, where there’s an undead ghoul lying in a coffin. Hooray!

Tomorrow: I’m Someone Else.

The camera pans across the foyer in the opening scene. As we get to the drawing room doors, the camera’s focus is too high, revealing the studio lights above the top of the set.

When Vicki and Carolyn talk in the foyer, there’s a huge shadow from the camera on Carolyn’s back.

Roger says “either your mother has taken leave of her senses, or I have” at two different points during the library scene. He realizes that he’s repeating himself halfway through the line, but by that point, he’s committed to it.

When Carolyn walks into the drawing room to confront Liz, the camera jumps a little bit, as if it’s startled.

This episode is the last appearance of lawyer Richard Garner, played by Hugh Franklin. Garner appeared in six Dark Shadows episodes, starting in November 1966, and he represented Roger when he was accused of killing Bill Malloy. The character’s biggest impact on the show was that he introduced his tedious son, Frank Garner, who appeared in 19 episodes as a possible love interest for Vicki.

Franklin was a Broadway actor in the 1940s who transitioned to television in the 50s, appearing on a few anthology shows and taking small parts on the soap operas Love of Life and As the World Turns.

After Dark Shadows, Garner played Dr. Charles Tyler, part of the original cast of All My Children, and he stayed with the soap from 1968 to 1981. Dr. Tyler’s on-screen wife, Phoebe, later married Langley Wallingford, played by Louis Edmonds (Dark Shadows’ Roger).

One more trivia fact about Hugh Franklin: He was married to novelist Madeline L’Engle, who wrote the children’s science-fiction classic A Wrinkle in Time. There, I’m done.

Tomorrow: I’m Someone Else.