“You’re very fond of it, aren’t you? Do you know why? Because I gave it to you.”

So here’s the incredibly strange television show that we’re watching right now: An undead ghoul from the 18th century has risen from the grave, moved into his old house, and kidnapped a waitress from the local coffee shop. Now he’s dressing her up in his dead girlfriend’s wedding dress, and taking her out on make-believe dates.

And the only reason why the show is this weird is that Ron Sproat hasn’t had time yet to think up anything weirder.

I haven’t talked about the writers very much so far, but this is a good moment to start, because it’s around this point that it starts to make a difference.

For example, you can tell that this storyline is written by head writer Ron Sproat, because it’s a kidnapping story, and there’s nothing Sproat loves more than locking somebody up in a room and leaving them there for as long as he can.

Ron Sproat joined the show in October 1966, and in early December, he locked Vicki in a room in the Old House for two weeks. That filled some time and was mildly suspenseful, so he continued to play on that theme.

Over the next year, David gets trapped in the mausoleum for a week, Vicki spends a few months in jail, and Carolyn gets locked up in a root cellar. After a while, you get the sense that if Sproat was the only writer on the show, he would do nothing but lock up women and children and then worry about them.

Now he’s got Maggie in the Old House, and she’ll be moving from one confined space to another for kind of a long time. I’m not going to tell you how long, because I don’t want to depress you, and lots of interesting things happen to her. Let’s just say that Maggie doesn’t get much of a tan during the summer of 1967.

Meanwhile, if you like creepy abduction stories, then this is a good one. Barnabas prepares a romantic dinner for “Josette”, who’s in such a deep hypnotic trance that she might as well be lobotomized. She just smiles and twinkles and agrees with everything that Barnabas says, only echoing his words in a distant, childlike voice.

And the super creepy thing is that Barnabas is delighted. You have to assume that the real Josette had a working brain stem, and the ability to think and speak like a normal person. One of the few things that we know about her at this point is that she ran away from Barnabas, throwing herself over a cliff so that he couldn’t turn her into a vampire. Clearly, she had her own thoughts and feelings. But as far as Barnabas is concerned, this is a perfect substitute. 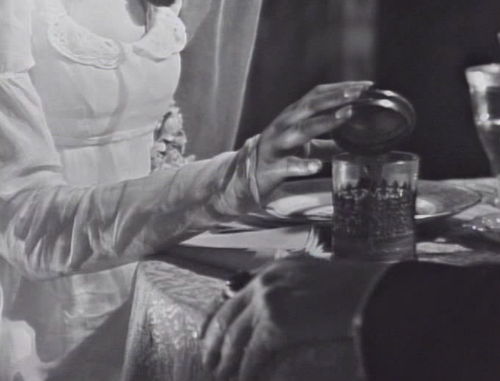 He starts prompting her with false memories, “reminding” her that they always used to eat dinner by candlelight.

“Ah,” he says, “you have your music box with you. You’re very fond of it, aren’t you? Do you know why? Because I gave it to you. It was the only present you ever accepted from me. You had to keep it hidden because there were those against our love.”

If the show has to be slow sometimes — and it’s a 1960s soap opera, so I’m afraid that it does — then this is exactly how they should be spending their time. Moment by moment, they’re building up a picture of Barnabas’ obsession, exploring the full extent of his madness in meticulous detail.

The last couple weeks have brought so many scenes of Maggie’s concerned friends recapping their heads off about her mysterious condition. Watching the monster is actually a lot more interesting than watching the “good’ characters. This idea is not lost on the writers and producers. Stay tuned for more on that idea.

Then there’s a knock at the door — Sam’s come to the house, to tell Barnabas that he can’t continue working on Barnabas’ portrait while his daughter is missing. For some reason, this visit seems to come as a complete surprise to Barnabas; apparently he’s forgotten that he asked Sam to come over to his house every night for the last couple weeks.

Barnabas quickly stashes “Josette” upstairs in her room, while Willie stalls Sam and Joe on the front porch.

I think that I can confidently say at this point that this is unlike any other television show in the history of anything.

Barnabas talks to Sam and Joe; obviously, it’s perfectly understandable that Sam can’t work on the portrait, no problem at all, feel free to take your paints with you, thanks for dropping by, please get the hell out of my house as quickly as you can, is this your hat?

Upstairs, Willie tries to keep Maggie quiet, but she hears her father and her boyfriend talking, and it’s starting ro break the spell.

And then the cutest thing happens. We cut back to the guys in the drawing room, and Sam is taking a look at the script. Barnabas leans over to get a little refresher on his dialogue, too. 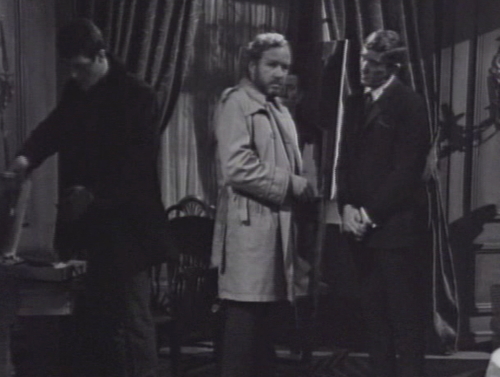 Then Sam realizes that the camera is on, and he whisks the script behind his back, looking like a guilty schoolboy caught stealing candy. How cute is that? It’s one of the best Dark Shadows bloopers of all time; go check it out. 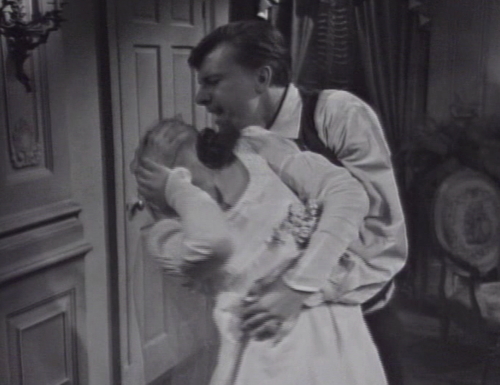 Meanwhile, in the world of actors who remember what they’re supposed to say, Maggie is getting disoriented, memories of her real life starting to come through the hypnotic fog. She realizes that Sam and Joe are downstairs, and they’re looking for her.

She’s about to cry out, but Willie keeps his hand over her mouth and holds her down. In the struggle, they knock something over. (This is one of the rare times when the actors are actually supposed to knock over a prop.)

This is awesome! It’s actual nail-biting drama, an ironic moment that could be a turning point for the whole story. And the tragic conclusion is: Sam and Joe leave the house without realizing that Maggie was only a few feet away.

Once they leave, Barnabas glowers and heads upstairs. There’s a big music sting,  which for once is 100% justified.

Okay, the big finish: Barnabas walks into the room, glares at Maggie, and orders Willie to leave.

Maggie is sobbing. Barnabas says, “Why are you crying, Josette? Why did you call out?”

Barnabas:  You were trying to escape from here, weren’t you? You tried to leave me, didn’t you?

And we see him approach, filling the screen with darkness. There’s a muffled scream.

Amazing! This is a real high point for this period of the show, an early example of what Dark Shadows can be when they take the time to put a dramatic situation together. More good times coming up.

Barnabas usually wears his ring on his right hand, but he switches it to the left hand in this episode, so the audience can see it when he’s having dinner with Maggie, and when he walks upstairs to Josette’s room. 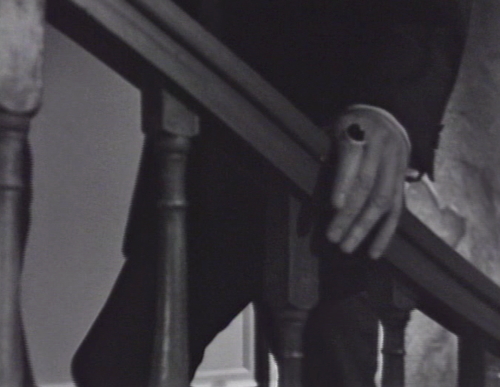 Barnabas gets so excited when he’s prompting “Josette” to respond that he stumbles over the words, and then steps on her response:

Barnabas:  You don’t know what it means to me to hear you say those words.

When Barnabas begs “Josette” to say that she forgives him, there’s a reflection of the candlelight in the camera lens, causing a white streak at the top left corner of the frame.

As Willie leads Maggie to the stairs, there’s a loud squeak from the studio.

Barnabas tells Sam, “Even though you had the time, I wouldn’t be able to sit for you, as I told you. I have a plan to start a business of my own.” He means “even if you had the time”.