“Willie and I have an understanding.”

Yesterday, we left David at the Old House, hearing snarling dogs and banging on the front doors. There’s not as much turning of the doorknob as you might expect, just banging and yelling.

Then the dognoise suddenly stops and everything is fine, which says a lot about how seriously they’re treating cliffhangers in this period of the show.

David:  What did you do with the portrait of Josette?

Barnabas:  It was put away.

Barnabas:  Into another room.

And that’s the level of conversation we’re dealing with. It’s a good thing that Jason shows up in a minute because this scene could put people in the hospital.

Back at Collinwood, Liz tells Jason that Willie’s working at the Old House. Then they do another one of their blackmail comedy skits, with some funny lines for Jason.

“So, I’m finally going to have a Swiss bank account,” he purrs. “I’ve wanted one for so long. I wonder what the number will be? I do hope it’ll be a lucky one.”

Then Jason walks away, and Liz stands and glares out the window for 12 seconds. It doesn’t sound long when you say it like that, but on television, 12 seconds is an eternity. You can clearly see the difference here in what they used to consider the expected pace of a television scene. These days, you’d never have a 12-second pause where nobody moves, unless you were absolutely convinced that every single person in the audience was a stroke victim. 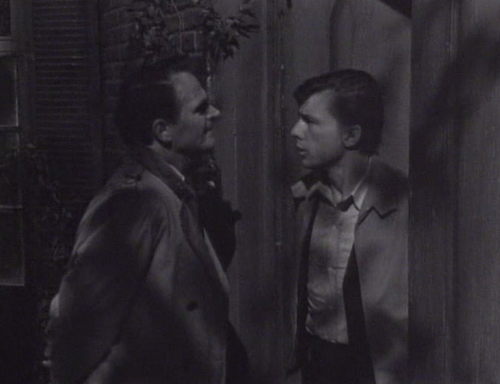 There’s more comedy when Jason visits the Old House. Willie answers the door, and Jason smirks, “Well, now. Is the lady of the house in?”

Jason pushes his way through the door, and demands to know what’s going on.

Jason:  So, this is where you work, hmm? Tell me, Willie, just exactly what is it you do here?

Willie:  Well, uh… a little bit of everything. I fix the place up. Carpentry, plumbing.

Jason:  And a little light housekeeping?

Obviously, that sounds super gay, and I’m not the only person who thinks so — they actually got a memo from ABC about it. It’s printed in one of my Dark Shadows books — dated April 19, 1967, and signed by Bernardine McKenna from Broadcast Standards and Practices:

“Please ensure that Jason’s wisecracks about ‘light housekeeping’ and ‘the lady of the house,’ as addressed to Willie are delivered so that there is no insinuation that Jason suspects a sexual relationship between Willie and Barnabas.”

Which is awesome. (Here’s another example of McKenna’s notes, for Rocky and Bullwinkle episodes.) 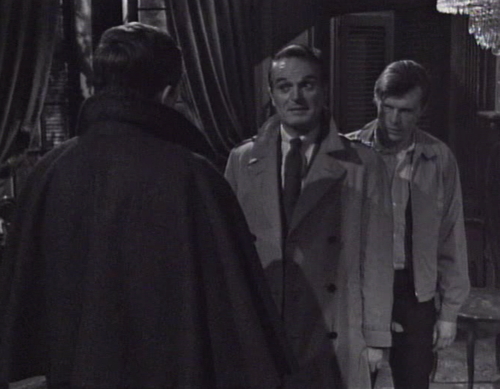 Barnabas says, “Willie, I think it’s time for you to do that job that you have to do,” and Willie slinks out, which doesn’t sound suspicious at all. And then there’s more dialogue like this:

Jason:  I think I should warn you about Willie. The kind of man he is?

Barnabas:  I know what kind he is.

And then it goes on like that, approximately forever. I’m speeding through most of the episode today, because I want to get to the dream sequence, which is amazing.

We see Maggie in her bedroom, saying goodbye to her father, Sam. He’s got “the late shift,” painting Barnabas’ portrait at the Old House.

Maggie brushes her hair and goes to bed, and then we get the typical wavy “dream sequence” camera work.

In the dream, Maggie’s in a misty forest graveyard space, which kind of looks like the set for a spooky musical number on a variety show. It’s fantastic, all dry ice and vaseline on the lens filter. 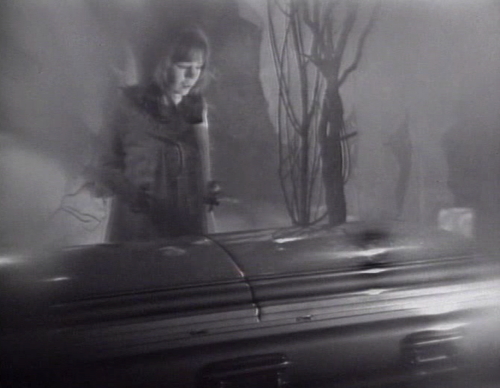 She picks her way through the cemetery, and finds a coffin. The coffin lid opens, and Maggie screams in terror…

… because she’s lying in the coffin!

Back to Maggie screaming, and her face has turned into a skull! 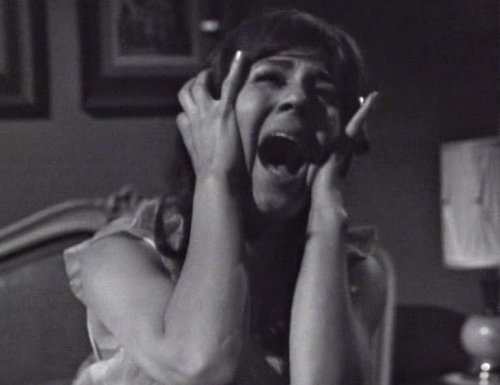 Maggie wakes up with a blood-curdling shriek that goes on and on. A big musical sting, and that’s the end of the episode.

WHO DOES THIS? It’s amazing! The best episode ending all week.

Monday: Fangs for Nothing.

As Barnabas leaves the Old House to walk to Collinwood with David, the door doesn’t quite close behind him.

In the late 60s, editing videotape was expensive and difficult, so they shot each episode “live to tape” — as one unbroken take, including pauses for the commercial breaks.

They usually structure an episode so that they fill a little time when an actor has to walk across the studio, from one set to another. For example, in yesterday’s episode, Liz had to go from Collinwood to the Old House set. After her exit, Vicki and David kept talking to each other for a minute, and then they did a long pan across the Old House set to give Liz time to get into position. That’s why you get those long “atmospheric” pauses sometimes.

So shooting a dream sequence can get a little challenging. Traditionally, on television and in movies, you see a shot of the character sleeping, there’s some wavy lines, and then you see that character in the dream. On Dark Shadows, they had to figure out how to get the character from the bedroom over to the dream set, and then back to the bed.

In Maggie’s dream today, they use a few different tricks, including a stand-in, a pre-filmed insert and a still photograph. The stand-in was Dorrie Kavanaugh, who was in six Dark Shadows episodes, most notably as Phyllis Wick in November. Kavanaugh later played Cathy on One Life to Live, and Martha on Ryan’s Hope.

So, here’s what they do. Leading up to the dream, we see Maggie tossing and turning in bed. She rolls over on her side, and then there’s a cut to Kavanaugh, who lays with her back to the camera. One of these has to be a pre-filmed insert, because both shots are clearly filmed in Maggie’s bedroom set.

The camera goes wavy, and we cut to Maggie, entering the dream set. She opens the coffin, and begins to scream — but she’s not really screaming, just miming to a sound effect. The camera cuts to a still photo of Maggie lying in the coffin, and lingers there for a moment while Maggie and the stand-in get to their positions.

Cut to Kavanaugh, who’s now standing somewhere nearby against a black background, holding up the skull to her face. Then back to Maggie waking up in her bedroom, now actually screaming.

The interesting thing about this (for me) is that the most remarkable shot in the episode — Maggie as the skull, screaming in darkness — is entirely a result of the technical limitations. They needed eight seconds for Maggie to get back to the bedroom set, so they had a stand-in holding up the skull.

If they’d had the money and equipment that night-time TV had, they would have shot it like every other scene, with Maggie playing all the parts and doing her own screams. But the creative workarounds that they used — the stand-in, the sound effect, and the skull — give the sequence a weird, uncanny vibe that you wouldn’t see anywhere else on television.

Monday: Fangs for Nothing.