“Do you want to stop it, Barnabas? Must you stop it?”

Hey, remember the Collins family? I could’ve sworn that there used to be a television show called Dark Shadows, about this rich family that lived in a big house on a hill.

For months now, the Collins family has been squeezed off the screen by a vampire, a ghost, two doctors, a lawyer, a marionette bat, and so on. Being a living human being with the last name Collins used to mean something in this town.

Well, they’re sick of it. One way or another, they’re going to get the Collins family back to center stage where they belong.

Luckily, Julia’s sick of the current storyline too. She’s finally had it with Barnabas — two days ago, he tried to choke her to death. The ghost of his little sister stopped him, but even after that, he still threatened Julia. All he does these days is think with his fangs.

So Julia’s attitude at the moment appears to be: Why even bother? It’s all falling apart anyway. When she first lied her way into Collinwood, she had big dreams — a scientific breakthrough, a romantic future with a tormented bachelor, and, presumably, zero felonies. Now those dreams are dead.

Julia used to be the character who always had six lies available for any situation. She doesn’t have a plan anymore; she’s not scheming or manipulating. She’s just telling the truth, because she’s tired and scared, and she doesn’t know what else to do.

So here’s the Collins family, all standing in a line like they’re having a panel discussion. The subject up for debate is what to do with David. Yesterday, his ghost friend told him that someone at Collinwood will be destroyed by the dead. You can only put up with that for so long.

Elizabeth, standing in for the audience, insists that they can’t let this go on. Julia, in truth mode, tells them that she’s talked to Sarah too, and suggests that they try a séance to contact her. Carolyn is dismissive and Roger is unsure, but today we need to move things along, so Liz becomes an instant convert.

Liz:  We learned something from the last one, Roger. You laughed at it then, but you ended up quite impressed. We have got to have this séance. Tonight! We’ve got to reach Sarah — otherwise, we may never find out what’s wrong with David.

That’s not exactly how the last séance went down, at Barnabas’ weird 1790s costume party. Roger was actually the one who insisted on running the séance, and I’m not sure what Liz thinks they learned. But that was four months ago, and who even remembers back that far?

The important thing is: Joan Bennett is sick of being on the show once every two weeks. She wants a storyline. And if a séance is how she gets it, then we’re having a séance. Tonight! Right now! 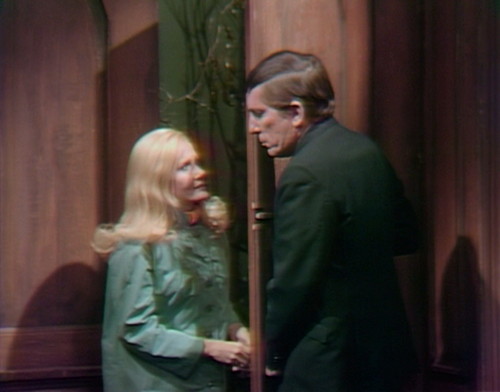 There’s a real sense of urgency in this episode — they have someplace to go, and they want to get there in a hurry.

Carolyn runs over to the Old House, to tell Barnabas that there’s a plot point coming up, and he probably ought to be there. They hardly even give her time to walk in the door.

She tells Barnabas about the séance, and then she gets a strategic close-up, so Barnabas has time to run to the other set.

Then we cut to Liz, standing in the study and giving Barnabas a few more seconds to hit his mark.

Liz:  Barnabas — you, of all people, objecting to a séance! You’ve always been so interested in the past — I think, sometimes, to the exclusion of the present.

And — presto! — Barnabas is there. He was off camera for 25 seconds, and in that time he put on his cape, grabbed his cane and sprinted over to the study set. You can actually hear Barnabas’ approaching footsteps while Liz is pretending that they’re in the middle of a conversation. They’re setting the new land speed record for vampires.

This is even more remarkable when you consider that they spent the entire episode on Monday with Julia pacing back and forth in the drawing room, struggling to finish a game of solitaire. All of a sudden, there’s a deadline.

Barnabas and Liz get a moment to sit down and talk about David, and then they’re interrupted by Roger, telling Liz that they’re almost ready in the drawing room.

We’ve spent months watching people try to make contact with Sarah — it usually takes at least a full episode for someone to find her, and even then, she doesn’t say much. But now we’ve got a whole crowd of people working on it, at top speed.

This is one way for the show to signal that something important is about to happen. The storyline is clearly speeding toward some kind of climax — but they’re not dropping many clues about what’s coming up next. This is the definition of suspense, which we talked about when Maggie escaped from the Old House — the audience knows that something’s going to change, but we have no idea what’s coming.

Barnabas and Julia get a few seconds alone for one final face-off.

Barnabas:  What if Sarah doesn’t appear, but Dr. Woodard does? What will you say to his ghost?

Barnabas:  Are you willing to take that risk?

Julia:  I’m willing to take any risk. I have no choice, but to see this through to the end.

All right, then. One ending, coming up.

Everybody gathers in the drawing room — including Vicki, who just shows up, because they didn’t have time for a scene where someone invites her.

They put the book of family history on the table, so that they can positively ID Sarah if she actually shows up. That’s the Collins family for you. Those aren’t portraits on the wall; they’re mug shots.

And so, once again, ABC-TV’s normal afternoon schedule is interrupted for a spot of necromancy. Everyone sits in a circle, with their pinkies touching.

The candles are lit, the thunderstorm rages outside, and they throw on soundtrack cue 31 — the standard Dark Shadows séance music, all kettle drums and snaky woodwinds.

They hear a snatch of recorder music, playing “London Bridge”, which means they’ve got Sarah’s attention. At a prompt from Barnabas, Carolyn closes her eyes and pretends to go into a trance.

Her Sarah impression leaves something to be desired.

Roger:  Speak to us, Sarah… through Carolyn. We are your friends.

Roger:  Sarah, tell us about your friend, David.

Carolyn:  I have no friend.

Apparently, Carolyn thinks that in the past, everybody talked like Indians in cowboy movies.

Roger:  But you come to David.

Carolyn:  Let me go back. I do not like it here. I have no friend named David.

But Sarah’s not going to put up with that. She grabs Vicki, and starts speaking through her.

Vicki:  She lies! David is my friend. I play with him.

Carolyn tries to keep control of the situation.

And that’s when things start to get a little weird.

Vicki:  Why is my new nursemaid late? I drew a picture of how she is to look.

Roger:  Sarah, we want to know about David. Why do you come to David?

Vicki:  To tell… Let me go to the gate. Please, I’ll hear the carriage there.

Roger:  Sarah, tell us about David.

Vicki:  Barnabas will take me to the gate. 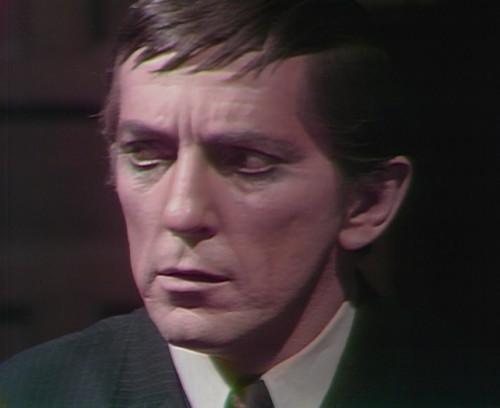 Barnabas:  This is ridiculous… cruel!

Vicki:  Barnabas, when you marry Josette, will you still love me? Will you come and see me at the new house?

Roger:  You come to the new house to see David. Why?

Vicki:  To tell him the story. The story of how it all began… 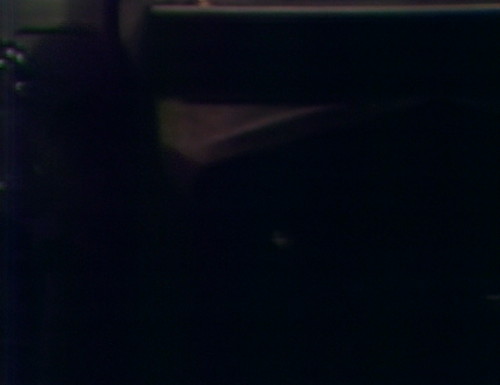 Vicki screams, and all the candles blow out. Barnabas jumps up to turn on the light…

… And somebody else is sitting in Vicki’s chair.

It’s a young woman, who’s surprised and horrified to find herself sitting in a room with strangers. She says that she’s Phyllis Wick, and she’s come to Collinwood to be the new governess for a 9-year-old girl named Sarah.

The camera pulls back, and the room goes still…

… and then we see Vicki, standing in the sunshine, looking at the Old House. But the house looks different — it looks new.

And that’s not the only thing that’s new. We’re about to start a whole new chapter for Dark Shadows — with new characters, new stories and a startling new premise that changes everything. See you Monday.

When Julia suggests the séance, Roger says, “I don’t like séances.” This is exactly the opposite of his attitude at Barnabas’ costume party; he was the one who insisted on holding a séance, and after the party, announced that he enjoyed it immensely.

Roger turns off the lights, and walks around the table to his seat. As he passes, you can see part of a camera on the left side of the frame.

The cast freezes around the drawing room table as the camera pulls back and holds on a long shot, suggesting that they’re suspended in time as Vicki starts her journey. The camera pulls back too far, revealing the paneling built above the set, and the boom microphone.

Phyllis Wick is played by Dorrie Kavanaugh, who appears in six episodes, mostly as a stand-in for Kathryn Leigh Scott. We saw her last in May, filling in for Maggie, who was walking around the Old House wearing Josette’s wedding dress. This is Kavanaugh’s only speaking role. We’ll see her again as a stand-in for Josette in a dream sequence. When we see Phyllis Wick again in April 1968, she’ll be played by Margot Head. 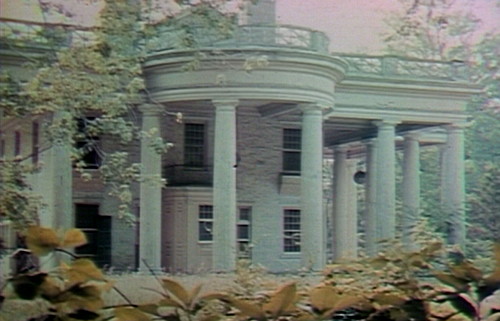